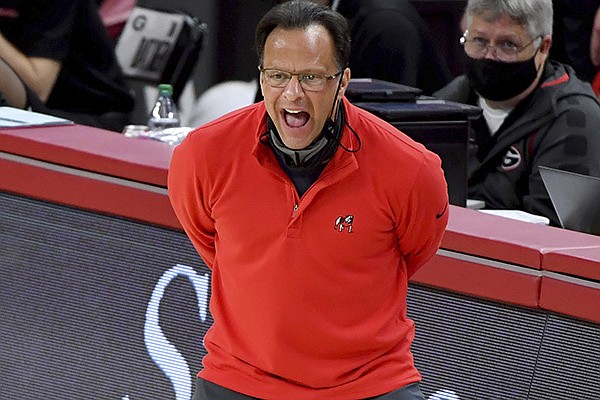 Georgia coach Tom Crean talks to his team as they play Arkansas during the second half of an NCAA college basketball game Saturday, Jan. 9, 2021, in Fayetteville. (AP Photo/Michael Woods)

Johnson sat out the Bulldogs' first 10 games while awaiting clearance from the NCAA, which was delivered on Monday, two days after Georgia lost 99-69 at Arkansas.

Johnson will be a potentially important addition to Crean's roster. The Bulldogs (7-3) have lost their first three Southeastern Conference games.

“We’re extremely excited to have K.D. eligible," Crean said in a statement released by Georgia. "Probably the only people more excited than me are K.D. and his mother, Jada. K.D. has been with us every day in workouts and practices since last summer and has been incredibly patient and mature throughout this process. I would like to thank NCAA for their efforts as we worked to reach this resolution.”