LB Edwards returning for Razorbacks in 2021 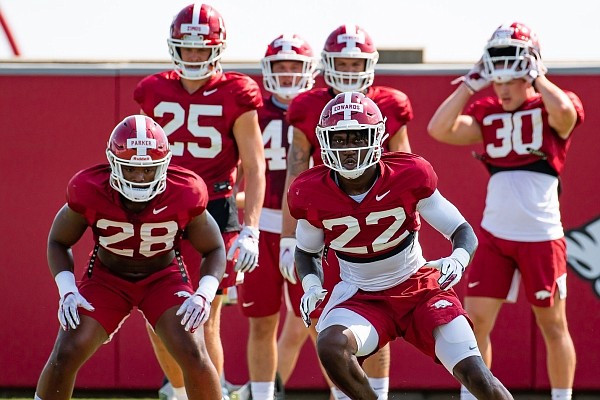 Arkansas linebackers Deon Edwards and Andrew Parker run through a drill during a preseason practice on Sept. 7, 2020.

FAYETTEVILLE — Another Arkansas senior has announced he will return for an additional season with the Razorbacks in 2021.

Deon Edwards, a linebacker who played in five games last season, will take advantage of an NCAA exception that allows players in 2020 an extra year of eligibility. His decision comes after he reportedly entered the NCAA’s transfer portal last week.

Playing primarily a special teams role, he finished with two tackles in 2020, both in the season finale against eventual national champion Alabama.

Edwards did not play against Georgia, Ole Miss, Texas A&M, Florida and LSU. He did, though, recover a fumble in the Razorbacks’ 21-14 win at Mississippi State on Oct. 3.

Edwards is the eighth Razorbacks senior to announce plans to return next season and the first since defensive end Dorian Gerald on Dec. 29.