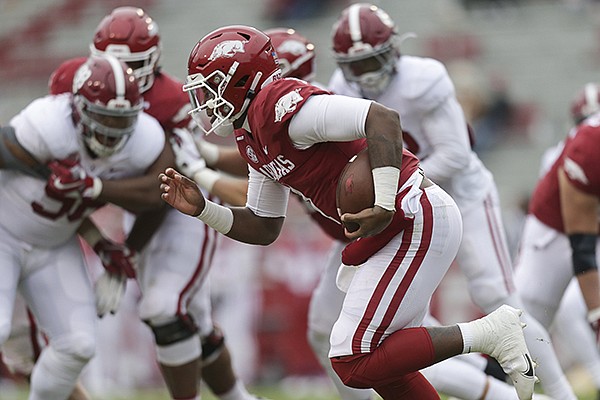 Arkansas quarterback KJ Jefferson runs with the ball during a game against Alabama on Saturday, Dec. 12, 2020, in Fayetteville.

FAYETTEVILLE — Four of Arkansas' football opponents ended the 2020 college football season ranked by The Associated Press, and at least one service has ranked the Razorbacks' schedule the nation's most difficult.

Arkansas edged Alabama for the nation's highest-rated strength of schedule, according to WarrenNolan.com. The Crimson Tide played three more games than the Razorbacks — in the SEC Championship Game, the Rose Bowl and the College Football Playoff Championship Game.

Alabama finished the season ranked No. 1 following a 13-0 campaign that was capped with a 52-24 victory over Ohio State in the CFP championship game Monday. Other SEC teams ranked in the final poll were Texas A&M (4th), Georgia (7th) and Florida (13th).

Arkansas lost to all four teams by a combined margin of 115 points.

Those four teams were among seven SEC teams — all of which played the Razorbacks — ranked by the AP during the preseason. LSU, Auburn and Tennessee were ranked No. 6, 11 and 25 in the preseason, respectively, but none were ranked in the final poll.

That collection of teams led Arkansas athletics director Hunter Yurachek to call the Razorbacks' schedule the “most challenging schedule in the history of college football."