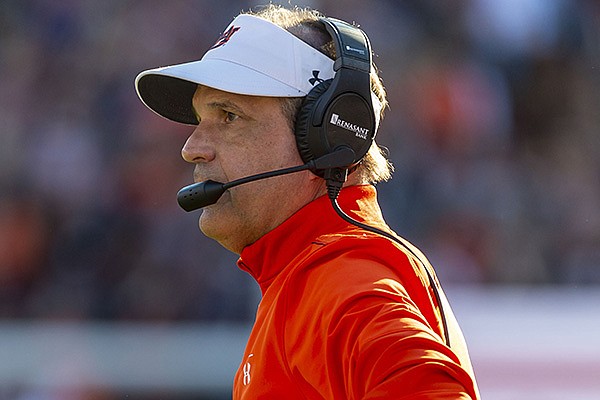 Auburn defensive coordinator Kevin Steele looks on during the first half of an NCAA college football game against Alabama, Saturday, Nov. 30, 2019, in Auburn, Ala. (AP Photo/Vasha Hunt)

KNOXVILLE, Tenn. — Tennessee coach Jeremy Pruitt has hired Kevin Steele as a defensive assistant coach, bringing him back to the program where the former Auburn defensive coordinator started his coaching career.

Steele was coordinator at Auburn the past five seasons with his defenses ranking in the top 20 nationally in scoring defense in four of those seasons. Steele's defense also produced 12 NFL draft picks.

Tennessee ranked 69th in scoring giving up 30.1 points a game as the Volunteers went 3-7. It's a finish that has had Pruitt's job security in question with Tennessee running an in-house investigation into questions about recruiting.

Pruitt said he has respected and admired Steele for a long time and had a chance to work and learn from the longtime defensive coach when both worked at Alabama in 2007-08.

“He has outstanding knowledge of the game and understands what it takes to be successful in this conference," Pruitt said in a statement. “Having coached under the great Johnny Majors, he has a sincere appreciation for what it means to be a Tennessee Volunteer.”

Steele graduated from Tennessee in 1981 after transferring from Furman following his freshman season. He was a student assistant coach for Majors in 1980, a graduate assistant in 1981 and coached outside linebackers in 1982.

Steele has spent 13 of his 38 years in coaching in the Southeastern Conference, 10 as a defensive coordinator. Steele said he and his wife were excited to be coming home.

Under Steele in 2020, Auburn's defense ranked fourth in the SEC in scoring defense. He was interim head coach during Auburn's Citrus Bowl loss to No. 15 Northwestern.