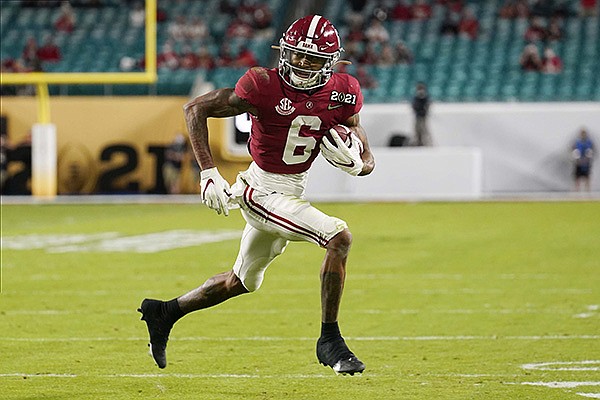 It is OK to be almost as sick of Nick Saban and Alabama Crimson Tide football as you are of the coronavirus pandemic.

Both have dominated our lives — one for almost 10 months and Tide football for a dozen years, even during a season that the virus almost kept from happening.

Saban tested positive for covid-19, but the virus barely slowed him down. And Alabama overwhelmed Auburn in its one game played without Saban.

While the world justifiably was worried about the deadly disease, Saban was focused on winning football games.

That’s not a knock on him. That’s just him.

That is part of what makes him the greatest of all time.

Monday night against what was supposed to be a worthy opponent, Ohio State University, the Tide rolled.

The final score, 52-24, was not indicative of how dominating the Crimson Tide were.

With the best coach, the best receiver in all of college football, a great running back and a very good quarterback, the Tide were unstoppable. Their defense was unheralded but pretty amazing against the previously undefeated Buckeyes.

Anyone who watched Bama this season knew the Tide were good, but not even the most expert of experts could have known the offense would be the best in the history of college football.

Argue among yourself, but only one team stayed within a touchdown of the these champions, which was Florida in the SEC Championship Game that the Tide won 52-46.

In 13 games, they scored more than 50 points seven times. Only twice did the Tide score less than 40, and one of those was the season opener.

Yet, as great as this team is, it is now what is expected from Saban and the Tide.

In the past dozen years, Alabama is 151-15 overall. The Tide have won six national championships.

Saban, who also won a title at LSU, has the most national championships in football history. His seven are more than all 129 other active coaches combined.

The day Saban was hired, he said Alabama hired the best recruiter in the country.

The only reason he’s not the most powerful man in the SEC is Commissioner Greg Sankey’s ability to negotiate TV contracts.

Actually, the Tide should consider sending Sankey a thank-you note. If not for the commissioner, there might not have been an SEC season. But he was patient, invited medical experts to be advisers and he listened.

Despite more than 150 games across the country being postponed or canceled, the season started and finished.

When the lights were were turned off, Alabama had slammed the Buckeyes to the turf, made them eat dirt and calmly gathered to celebrate.

There were dozens of examples of this team’s unity, but the one that will be remembered was when Heisman Trophy winner DeVonta Smith — who had 12 catches for 215 yards and 3 touchdowns — left the field early in the second half with an injury.

The TV broadcast showed him stopping countless times to watch his teammates before receiving treatment. Then he returned to the field, his right hand heavily taped, and cheered for his friends.

He was named the game’s MVP, but he talked about the team.

This year, a tightly knit group marched triumphantly from one game to the next. In the end, the big trophy was the Tide’s again.

It is easy to be tired of Saban and the Crimson Tide, especially if you have to play them every year. Just don’t hate them more than the virus.