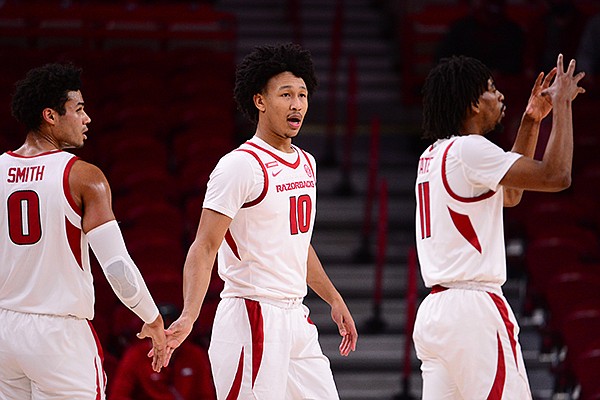 Arkansas players Justin Smith (0), Jaylin Williams (10) and Jalen Tate (11) are shown during a game against Mississippi Valley State on Wednesday, Nov. 25, 2020, in Fayetteville.

FAYETTEVILLE — LSU Coach Will Wade is impressed by the work Eric Musselman and his University of Arkansas staff put in remaking their roster and acquiring talent via the transfer portal.

“They do a great job of finding guys and they’ve got a good niche with the transfers,” Wade said. “If you look at any transfer who’s leaving, you look at their list, it’s very rare Arkansas is not on the list. I don’t know the intricacies of their program or how he does it, but it’s obvious he’s got it down to a science.

“Because I don’t think he gets nearly enough credit for this, but there’s people taking mid- and low-major transfers and graduate transfers all over the country. They’re not having the success that he’s having with them. So he’s getting the right guys.”

The Razorbacks have a roster loaded with transfers, and Wade pointed out a couple specifically in grad transfer guards Jalen Tate (Northern Kentucky) and JD Notae (Jacksonville).

“Tate’s from Northern Kentucky, and he’s obviously done a great job and adjusted well to the SEC,” Wade said. “Well, there’s five other grad transfers from their league that are with programs that aren’t winning nearly as much as Arkansas, that aren’t having the impact that Tate’s having at Arkansas.

“That to me is incredible and kind of where his magic touch is. He’s obviously got some formulas and some numbers, some stuff he runs, where he has a pretty good idea what these guys are going to be able to do.”

Wade pointed out Notae has a 35% usage rate in 23 minutes per game.

“He transferred from Jacksonville in the Atlantic Sun,” he said. “How many Atlantic Suns are out there that don’t even get off the bench on some of these mid-, high-major teams? And he’s the sixth man and he’s basically a starter, and he’s made an incredible impact.”

Arkansas guard Moses Moody and LSU forward Trendon Watford are two of only three SEC players who are averaging at least 16 points and 5.5 rebounds per game.

Coach Eric Musselman noted minutes are on the rise for true freshmen Davonte Davis and Jaylin Williams at a time when their playing time could be going in the other direction.

“Both of those guys have been great,” Musselman said. “I love how they’ve worked. I think their progression has been really good from a confidence standpoint.

“It’s unique because sometimes what happens with freshmen is they play a lot in nonconference, and then when you get to conference, a lot of the freshmen’s minutes kind of shrink.”

Davis scored a season-high 20 points in 37 minutes — nearly doubling his previous high of 20 minutes played — in Saturday’s 99-69 rout of Georgia. He shot 9 of 14, including 1 of 2 from three-point range. He also provided 7 rebounds and 6 assists, both season highs, and 2 steals to go along with 3 turnovers.

Forward Justin Smith got on the court with his teammates Monday for the first time since Dec. 30, spending around 25 minutes in no-contact, half-court situations at practice, which Coach Eric Musselman called a great step.

“He’ll wake up [Tuesday] … we’ll see how he feels, because that’s the big thing now,” Musselman said on his radio show Monday night. “Is it going to be sore because he did some things?”

Musselman said Smith would definitely fly with the Razorbacks to Baton Rouge for tonight’s game.

Musselman said freshman guard Khalen Robinson will start rehabbing pretty soon after surgery to repair a bone in his right foot, and his timetable for recovery is around four to four-and-a-half months.

The Razorbacks have surged to No. 19 in the country with a plus-9.2 rebound margin, behind only Mississippi State (9.4) in the SEC.

Arkansas had a much shorter roster last season that led to multiple double-figure rebounding deficits such as the 53-24 battering the Hogs absorbed in a 79-77 loss to LSU.

LSU Coach Will Wade noted the difference in board work for these Hogs and how they’ll battle LSU forwards Mwani Wilkinson and Darius Days.

“I think that’s an area they wanted to shore up through recruiting, through transfers and that sort of thing. They’ve addressed that and their rebounding numbers are pretty good. They’re a tremendous offensive rebounding team.”

Arkansas leads the SEC and ranks 21st nationally with 13.6 offensive rebounds per game.

LSU Coach Will Wade said he devoted a great deal of time in the offseason to preparing for Eric Musselman-coached teams.

Wade said Arkansas and one other unnamed team gave the Tigers enough problems that he and his staff drilled down hard on them.

“We spent a week to 10 days in the offseason really trying to study them, study what they do, study some of his tendencies,” he said. “We … watched a bunch of Mountain West games trying to give ourselves a better handle on things.

“Because we can get mad at the players all we want, but I felt like in both of those games against Arkansas last year I didn’t do as good a job as I needed in preparing our team, and I thought they were a little bit better than us. We obviously won the home game, but we got the brakes beat off us at Bud Walton.”

Arkansas leads the series vs. LSU by a 37-32 count as they meet for the 70th time, and the 60th time since the Razorbacks joined the SEC.

The Tigers hold an 18-12 edge in games played in Baton Rouge.

“A guy I didn’t mention who killed us last year was Henderson,” Wade said. “I know he hasn’t played much, but they’re kind of down in numbers a little bit. Henderson had 10 [points] and 6 [rebounds] on us at Arkansas last year. He really, really hurt us.

“We couldn’t score around him in the lane. He blocked and altered a bunch of shots. So we’re concerned about him as well.”