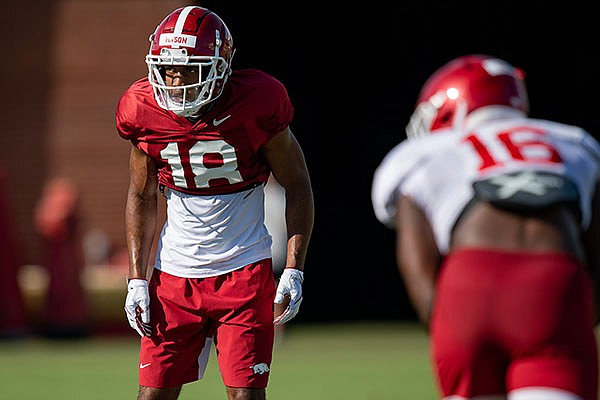 Arkansas defensive back Myles Mason (18) is shown during practice Friday, Aug. 21, 2020, in Fayetteville.

A junior safety from Trussville, Ala., Mason posted to his Twitter account that he has committed to Louisiana Tech. Mason entered the NCAA’s transfer portal in late December.

“So thankful for this opportunity!” Mason wrote. “All glory to GOD.”

In his final season with the Razorbacks, Mason recorded 33 total tackles, including nine against Ole Miss and LSU. He started three of Arkansas’ last four games in 2020.

As a true freshman, Mason played in nine games and saw the field for 106 snaps — 69 on defense, 37 on special teams — and posted five tackles. In 2019, Mason played in 11 games and finished with 28 tackles, including one for lost yardage.

Mason was considered a four-star recruit by ESPN out of Hewitt-Trussville High School and a top-15 prospect in Alabama, according to 247 Sports and Rivals. He initially signed with the Razorbacks over scholarship offers from Alabama, Auburn, Florida, Tennessee and other programs.

Mason is the second former Arkansas player to announce his transfer destination this week. Quarterback and place holder Jack Lindsey committed to Arkansas Tech on Monday.