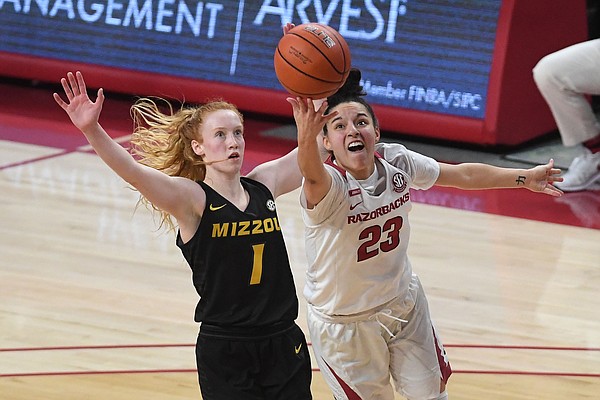 Razorbacks coach Mike Neighbors said Wednesday that she is expected to "practice full today for the first time," but he was still waiting for the "all clear" as of Wednesday morning.

"She was able to return to practice yesterday and shoot only – no contact," he added. "Hopefully we will make some progress in that area today."

Ramirez missed Arkansas' game against Texas A&M on Sunday due to a concussion. If she is not able to play, Neighbors said rotations would remain similar to what they were against the Aggies with Jailyn Mason starting in place of Ramirez, Marquesha Davis subbing in early and Destinee Oberg and Rylee Langerman filling in when needed.

Neighbors also provided an update on freshman guard Elauna Eaton, who tore her ACL prior to the season.

"She's doing good," he said. "We are going really really slow because there is no reason to go fast, and this is her second knee injury."

"Physically, she's ahead of schedule," Neighbors said. "We're just not putting her out there in a practice format, (or) practice gear yet because it's not going to help her recovery."

Neighbors went on to say she has handled the injury as well as any freshman he has seen, especially since she was poised to help the Razorbacks this season.

"She was going to be contributing a lot," he said. "She had earned the respect of those teammates, so there was a lot to be let down about."

But instead of being dejected, Eaton has been eager to learn.

"She's there, she's engaged, she's talking," Neighbors said. "I always talk to kids about, 'Are you really curious about how we do this thing?' You can tell that by whether they ask questions or not, and she asks questions all the time.