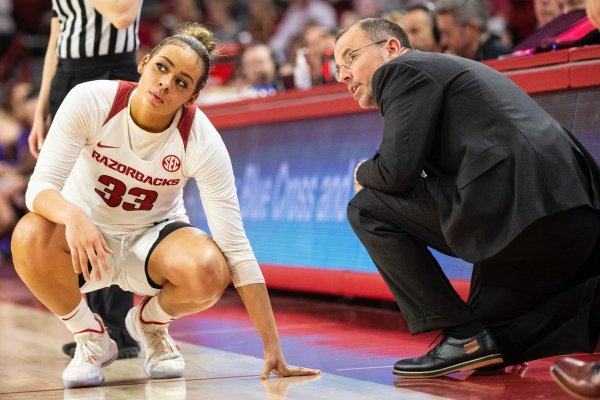 Arkansas associate head coach Todd Schaefer will miss the Razorbacks' game against Florida on Thursday due to a positive covid-19 test in his family, Razorbacks coach Mike Neighbors said Wednesday.

With Schaefer out, Neighbors has switched to coaching the team's defense.

"When I was an assistant coach, that's what I did," Neighbors said. "I was the defense, and it was kind of fun to be back out there."

With Neighbors taking over defensive duties, assistant coach Chantel Osahor has taken over the offensive side of the ball for the Razorbacks.

"There is a waiver this year that allows a few extra people to come onto the floor, so Coach Shirey has been very helpful this week in preparing for Florida and their defense," Neighbors said.

The positive covid-19 test has not impacted the availability of any other coaches or players on the Razorbacks' roster.

"We're not going to stop covid, obviously," Neighbors said. "That's uncontrollable, but the tracing can be something that we do control."

The Razorbacks have taken multiple steps to limit contact tracing, including spacing out during timeouts, not entering the locker room at halftime, traveling to away games on the day of the game, and not standing near other players during free throws.

"But we're still playing. ... As long as we continue to lead the country in games played – I know that's not a stat anybody gives a crap about – it means something to us this particular year."

The Razorbacks are one of six SEC teams to have played all four of their scheduled conference games this season.