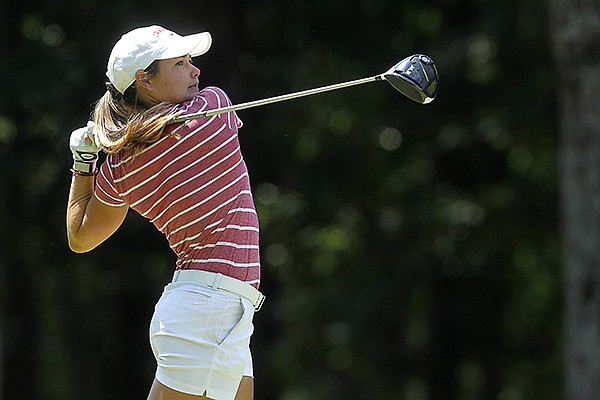 FAYETTEVILLE — University of Arkansas golfer Brooke Matthews has received an invitation to play in the prestigious Augusta National Women’s Amateur, the UA announced on Thursday.

The 72-player international event will take place March 31-April 3 in Augusta, Ga., with the first two rounds played at the Champions Retreat Golf Club and the final round on April 3 at Augusta National, site of The Masters, after a cut to 30.

Matthews, a junior from Rogers, enters the 2021 season on a tear, ranked No. 1 in the nation by GolfWeek after an excellent fall while playing an SEC-only schedule. Mathews won the inaugural Blessings Collegiate Invitational at her home course to open the season, beating reigning SEC player of the year Ingrid Lindblad of LSU by five strokes.

Matthews followed that with a runner-up finish at The Ally at Old Waverly, hosted by Mississippi State, and came in 11th at the Liz Murphy Fall Collegiate Classic.

Golfing at Augusta National, Matthews will follow in the footsteps of former teammate Maria Fassi, who made national headlines with her good-natured showdown with Wake Forest’s Jennifer Kupcho at the inaugural Augusta National Women’s Amateur in April 2019.

Kupcho won the event with a late flourish, but Fassi returned the favor by winning the NCAA individual championship at Blessings Golf Club the following month.

Matthews played seven of nine rounds in the fall at or below par. Her current stroke average of 70.33 is on pace to eclipse Fassi’s school-record 70.5 from the 2017-18 season.