Gym'Backs have quick turnaround with LSU 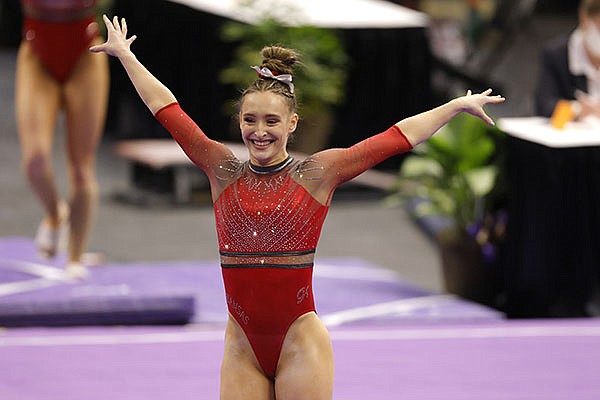 FAYETTEVILLE — The University of Arkansas gymnastics team debuted in nearly mid-season form last week with a 196.35 team score at preseason No. 3 LSU.

The impressive opening score under second-year Coach Jordyn Wieber was not big enough to win the meet over the Tigers, who notched a 196.55 at the Maravich Assembly Center. But it was enough to propel the Razoracks nine spots to No. 6 in the national rankings heading into tonight’s home opener.

“It shows the country and the judges that we’re here,” Wieber said. “I think we turned a lot of heads this past weekend. That was the goal.”

The Razorbacks get an immediate opportunity for payback as well, as No. 5 LSU comes calling to Barnhill Arena at 7:30 p.m. for a meet that will have capacity capped at 1,200 due to covid-19 distancing protocols.

Wieber said team scoring has more value than winning a meet, but the narrow margin at LSU created what-if scenarios for breaking the Razorbacks’ long losing streak to the Tigers.

“I always look back and think, ‘OK, we lost by two tenths, where could we have picked up those two tenths?’ and I drive myself nuts with that,” Wieber said. “But it’s only fuel for us. Getting so close to LSU boosts our confidence, but we’ve talked about it as a team. We don’t get better if we focus on beating other people because it takes the focus off ourselves.”

The Razorbacks had big moments in the opener. Junior Kennedy Hambrick out-performed LSU’s Kiya Johnson to win the all-around title with a 39.4, and also captured the balance beam from the anchor position (9.925) with the Tigers’ crowd in a frenzy over a big score on the floor.

“For our first meet out we felt pretty confident,” Hambrick said. “I felt like there were minimal nerves, like almost none at all. It felt like practice, like we do every day with our intrasquads.”

Said O’Hara, “We really started out strong and brought a ton of energy and made just like this amoeba almost within our team. … It was a ton of fun. It was an incredible way to start the season.”

Shaffer, competing in the all-around for the second time since 2019, said the Razorbacks’ preparation since August helped them start well.

“I heard multiple times and I felt the same way, that it did not feel like a first meet,” Shaffer said. “We didn’t have those first-meet jitters.

“For this week, I think each person can look back at their routines and come up with a tenth or a half-tenth to improve and get better.”

Wieber said she was confident the Razorbacks could open strong.

“This team has shown a different level of confidence than I saw from the team last year,” she said. “They were confident last year, but it’s higher this year. … I was every bit expecting they would come out as strong as they did.”

Arkansas led by 0.225 heading into the final rotation, but had some key deductions on the balance beam while overcoming a fall by Shaffer to post a 49.075. The Tigers passed them with a 49.35 on the floor exercise, led by Johnson’s 10.0 and a 9.975 from Bryant.

LSU stretched its winning streak to 20 meets against the Razorbacks since Jan. 20, 2012, and will look to extend that tonight.

Wieber thinks a reduced crowd doesn’t have to mean a tame climate at Barnhill.

“I think the atmosphere is still going to be great,” she said. “We’ll have less fans, but my message to anybody that comes and actually gets to sit in Barnhill Arena is we’re going to be a smaller crowd, but we need to be mighty.

“I hope that that crowd of 1,200 people feels like 7,000 people. That’s my mission for everyone sitting in the crowd, and we want to keep that energy up. It really does help our team. Based on what I saw at football and basketball, that energy is still possible with fewer fans.”

Wieber said sophomore Kiara Gianfagna (foot) and freshman Emma Kelley, the daughter of former Olympic gold medalist Mary Lou Retton, who had been in quarantine due to covid protocols, are closer to competing. Gianfagna has a chance to be back on the uneven bars this week, Wieber said.

“Once [Kelley] gets back in more training, I expect to see Emma in at least one, if not multiple, routines,” she added.