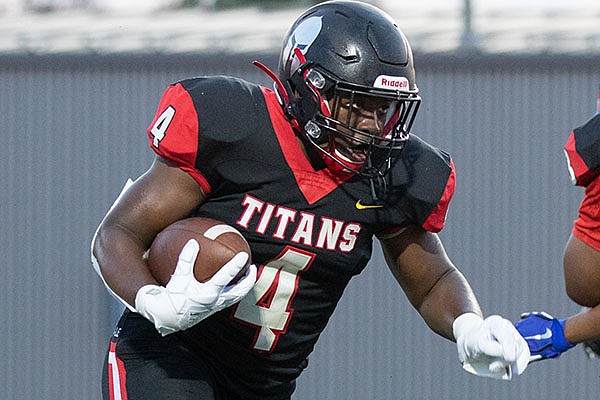 Jacksonville coach Maurice Moody is excited about the future of the Titans' program because of several outstanding young prospects.

Sophomore running back Darien Bennett headlines the young talent. He has an offer from Arkansas, but Moody sees more offers coming.

“I think he’s going to receive many others,” Moody said.

“I think athletically Darien is a freak,” Moody said. “You’re talking 6-2, 230 and can run a 4.5 in the 40. Extremely strong in the weight room. He’s a leader, he’s an intense guy. He’s an extremely hard worker. I think his upside is tremendous.”

The Titans will return seven starters on offense and nine on defense for the 2021 season.

“They’re going to pass the eye test,” Moody said. “They are some specimens. They look the part and on top of that they’re really good kids.”

“His father and I went to Arkansas State together, so we’ve been knowing each other forever,” Moody said.

Moody said Rhodes is making gains in the weight room.

"He’s long rangy and lean but he’s bought into the weight room,” he said. “He hit my starting quarterback so hard in preseason, he tore his ACL. He’s a thumper. He has a nose for the football. He loves the physical contact.

“I’m telling you right now he’s one to watch. He’s going to be a matchup nightmare at the tight end spot. Sometimes he might even play tackle because I think he’s that good. At inside linebacker, he’s moving well. He’s buying into changing his body.”

Moody believes Williams has a chance to be special.

“He’s the most physically gifted kid that I’ve ever coached,” Moody said. “That’s saying a ton. He loves the contact. He will hit you. He thrives on the big hits.”

“He has done a full 360,” Moody said. “He’s doing what ever it takes not for him, but for the team to be successful. You don’t have many guys that put the team first. They don’t do the team concept anymore. It’s all me, me, me, me, but he’s one of those team concept guys. He’s bought in.”

“His mother is a taller lady,” Moody said. “I think she’s right at 6 feet tall. His father is probably around 6-1. I anticipate him growing another two inches.”

“Those guys are going to blow up,” he said. “I think these are major, major college football players. I really do.”