Razorbacks happy to get back on track 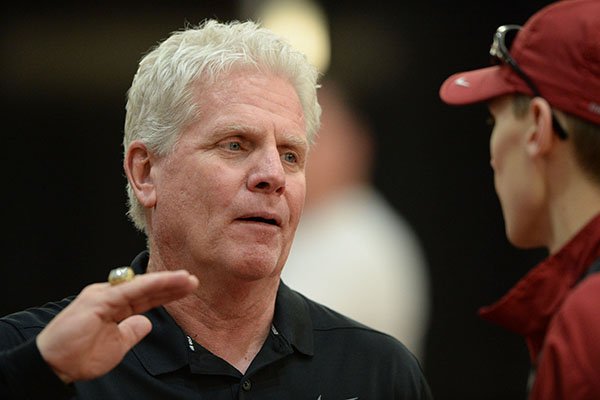 FAYETTEVILLE — The new track surface at the Randal Tyson Track Center will get plenty of work the next several weeks.

The University of Arkansas will host 11 meets during the indoor track and field season beginning with today’s Arkansas Invitational.

NOTEWORTHY No fans will be allowed at any meets this season because of coronavirus safety protocols.

Fans won’t be allowed to attend any meets because of coronavirus safety protocols, but Arkansas women’s Coach Lance Harter and men’s Coach Chris Bucknam are thankful their teams are able to compete after the NCAA Indoor Championships and the entire outdoor season were canceled last year.

“Any type of opportunity to actually be able to get on the track — that’s not a workout — and wear the uniform and compete against people is super exciting for our kids,” Harter said. “It’s something that’s definitely been highlighted on the calendar for them.”

The Razorbacks last competed in a track and field meet when they swept women’s and men’s SEC championships on Feb. 29 in College Station, Texas.

“For 322 days, we haven’t done any competitions,” Bucknam said. “So we’re thrilled that we’re able to prepare for one.”

“At this stage of the game, the way things are, it’s all about opening our arms, opening our facility up and letting as many in-state people compete as possible,” Bucknam said. “It’s good for the sport, and it’s good for all the kids.”

Season-opening meets generally don’t produce impressive performances, and Arkansas’ coaches said that will be especially true with the athletes being away from competition for 11 months.

“My expectations are not real high from a performance standpoint. I just want to keep everybody healthy and prepare for next week.”

Harter said nothing will be routine or taken for granted by the coaches.

“As a coaching staff, I think we’ll be ready for a lot of surprises,” Harter said. “But I do know that after this week, the competition escalates every week through the rest of the season that we’re hosting.

“For those that are newbies or transfers to our program, you’d better get your feet on the ground this week because if you don’t, next week you’ll just flat get run over by the quality of competition that’s coming in to join us.”

Arkansas will host its first of four pro meets as part of the World Athletics Silver Tour on Jan. 24. All four meets — held on consecutive Sundays — will be telecast on ESPN or ESPN2.

“It works out great for opportunities for the pro athletes — especially for our athletes that don’t have any eligibility left, but remain in Fayetteville to train,” Harter said. “It gives them an opportunity to sleep in their own bed and have great competition.

“We’ve become the focal point of indoor track in the U.S. Hopefully that spreads a good positive word across the world that if you want to have a great opportunity to compete in track and field, it happens in Fayetteville, Arkansas.”

Bucknam said he’s thankful to the Arkansas administration for taking on the added work of hosting the pro meets, which provides extra exposure for the UA programs and the Randal Tyson Track Center that help boost recruiting.

“The amount of time and effort that it takes to have the meets, it’s incredible,” Bucknam said. “There’s so much behind-the-scenes stuff that goes into it. Just hats off to our administration for finding a way to make it happen.”

In addition to a new track surface, other upgrades made to the Tyson Center include a new ceiling, lighting and sound system and an additional video board.

“The facility looks phenomenal,” Bucknam said. “I’m really excited about how things turned out [with the renovation]. It just looks really bright and sharp in there.

“Unfortunately, there won’t be any fans. We’re just going to have to wait until next year before they get in there.”

No fans will be allowed to attend the meets because of coronavirus protocols, but several meets will be televised on ESPN or ESPN2, and they all will be available to watch via live streaming. Here is a complete schedule: