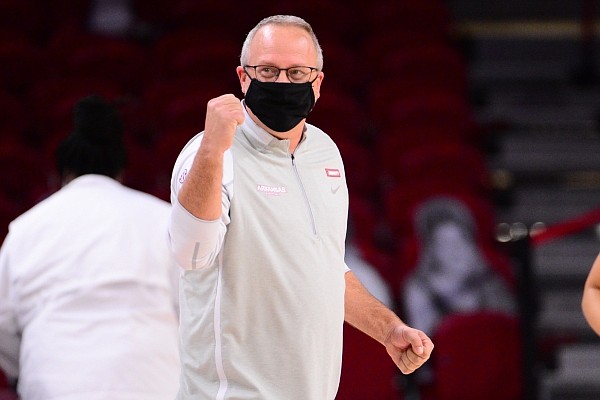 University of Arkansas women’s basketball Coach Mike Neighbors was the first Power 5 coach to offer sophomore point guard Maraja Pass, but he won’t be the last.

“It was very, very special,” Pass said of the Arkansas offer. “It was my first big one. It left me speechless, honestly. You work so hard and you finally get it.”

Pass, 5-5, of Shelby, N.C., received the offer from Neighbors on Dec. 14. Catawba College was the first school to offer her. Vanderbilt, North Carolina-Charlotte, Arkansas State University and Columbia have shown interest.

Since the offer from Arkansas, Pass has been in front of the TV when the Razorbacks play.

“The coaches seem really, really nice and really genuine every time we speak,” Pass said. “I think we connect very well when we speak. I talked to everybody on the coaching staff the last time we spoke.”

She and assistant coach Pauline Love have hit it off.

“I’ve really liked her. She’s really genuine,” Pass said. “Honestly we have a personal connect. I feel like she already kind of knows me, and I feel like if I ever met her I would instantly click with her.”

Pass is averaging 18.7 points, 7.3 assists, 6.3 steals and 3.5 rebounds while shooting 50% from beyond the three-point line and 71% from free-throw line. When Neighbors extended the offer, she noticed a certain trait.

“He was very straightforward,” she said.

“I try and take my game from everybody, so when they said that I started to watch her,” Pass said.

The No. 17 Razorbacks have the No. 8 scoring offense nationally with 86.6 points per game.

“They have very good ball movement,” Pass said. “Everybody communicates and plays really hard, like nobody ever gives up on the play and they play pretty fast.”

Pass has a 3.9 grade-point average and is considering majoring in psychology, but she remains open to alternatives.

“I honestly think everybody can use a little bit of therapy,” she said. “I have a big family, and I can kind of see everybody acting their own different way. I would like to study why people think the way they think, and I would like to help people with their anxiety or their issues and things like that.”

She said she plans to visit Fayetteville after the NCAA dead period is lifted.