Perimeter defense a riddle for Hogs 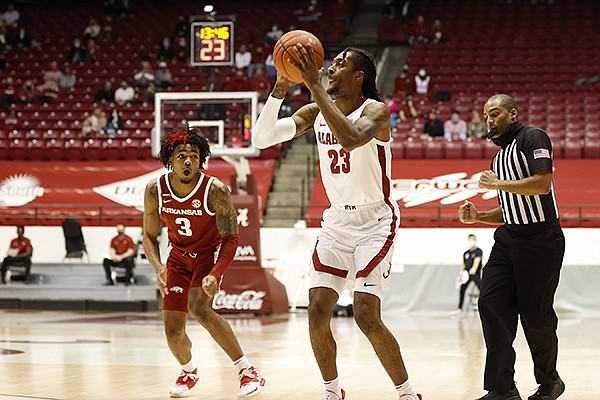 University of Arkansas Coach Eric Musselman spoke about the number of deep concerns he had after the Razorbacks’ 90-59 loss at Alabama.

Alabama, the SEC’s most prolific three-point shooting team, drained 15 of 36 three-pointers against the Razorbacks for a 41.7% conversion rate.

That tied the record by an opponent in Musselman’s college career.

Alabama is the second SEC team to make 15 three-pointers against the Razorbacks, joining Auburn, which went 15 of 29 from deep in the conference opener Dec. 30.

The Razorbacks are holding opponents to 31.7% three-point shooting overall (102 of 321), but conference foes are having more success. Auburn, Missouri, Tennessee, Georgia, LSU and Alabama have combined to make 52 of 139 three-point shots against the Hogs for 37.4%.

Alabama had seven players connect on their 15 made three-point shots, led by John Petty’s 5-of-9 shooting.

Three players who were considered questionable played in the game in Arkansas forward Justin Smith, and Alabama’s Herbert Jones and Jahvon Quinerly.

Smith recovered more quickly than expected from ankle surgery and returned to the starting lineup for the first time since the Hogs downed Auburn in the season opener. Smith provided 5 points on 2-of-4 shooting, 1 rebound, 1 assist and 1 steal in 18 minutes.

“We wanted to play him between 15 and 20 minutes coming into the game, and he played 18,” Coach Eric Mussleman said. “I thought it was good to have him back. I thought he did a good job of moving the basketball and trying to play the right way.”

Smith was projected to be out three to six weeks after the debridement surgery, but he missed a little more than two weeks and just four games.

Jones had a badly swollen finger that took him out of the Tide’s 85-65 win at Kentucky on Tuesday, but he started and notched 13 points, 4 rebounds and 2 assists in 23 minutes.

Alabama Coach Nate Oats said Jones’ finger was “huge” on Thursday and he did not practice, but he worked a little Friday.

“If Herb’s breathing and he’s capable of playing, he’s probably going to play,” Oats said. “He played pretty well. He was 7 of 8 at the free-throw line, so obviously his hand wasn’t too messed up.

“He gives us so much on both ends of the floor, so it was good to see him out there. He’s super valuable to what we’re doing.”

Quinerly, who had not played since Jan. 2 with an undisclosed medical condition, got in 21 minutes and had 7 points, 4 rebounds and 4 assists.

Alabama guard John Petty took over the school’s all-time lead in three-pointers made with a trey from the left wing at the 13:45 mark of the second half.

Petty’s 264th three-pointer surpassed the school record formerly held by Brian Williams, who made 263 from 1996-99.

The senior went 5 of 9 from three-point range against the Hogs to push his career total to 265.

Just over two weeks ago, Arkansas guard Desi Sills was in the midst of perhaps the best stretch of his career with five consecutive games of double-figure scoring, capped by 23 points in the Razorbacks’ 97-85 road win at Auburn. Sills shot 30 of 58 (51.7%) in those games, including 11 of 25 (44%) from three-point range.

The tide has turned for the junior guard since then, including his 1-of-8 shooting performance against the Crimson Tide. Sills is 9 of 35 (25.7%) overall and 3 of 15 (20%) from three-point land in the past five games.

“We went through it last year, you know, where he had really hot streaks and then some slumps,” Coach Eric Musselman said. “He’s definitely struggling right now. Our missed layups at the rim is very concerning.”

Justin Smith’s dunk on a back-door cut down the right baseline from Moses Moody early in the second half was a streak-breaker for the Hogs.

The dunk ended a stretch of nine consecutive halves in which Arkansas did not throw it through the hoop, dating back to JD Notae’s stuff on the final play of a 97-85 win at Auburn in the conference opener Dec. 30.

The Razorbacks did not have a dunk in the four games Smith missed.

With less than two minutes to play, Ethan Henderson dunked on a pass from Davonte Davis for the Razorbacks’ fifth dunk in six conference games.

The Razorbacks committed 18 turnovers, many of them on interior passes after dribble penetration.

Alabama outscored the Razorbacks 16-6 in point off of turnovers.

Arkansas had eight assists for the second-consecutive game, one off their season-low seven assists in an 81-68 loss to Missouri on Jan. 2.

Point guard Jalen Tate had six turnovers, though Coach Eric Musselman said two of those should have gone to players who did not handle his passes. Justin Smith and JD Notae had three turnovers each.

The Razorbacks did not have a field goal actually go through the net until Moses Moody sank a jumper at the 9:53 mark with the Hogs trailing 22-5.

Arkansas’ first three points came on free throws by Moody and Justin Smith, then Moody was awarded a bucket on a goal-tending call against Herbert Jones at the 16:35 mark.

That play cut the Razorbacks’ deficit to 8-5, but it went downhill quickly as the Tide launched a 14-0 run.

For the second consecutive game, the Razorbacks trailed by 25 or more points in the first half.