Razorbacks' latest games cause for concern 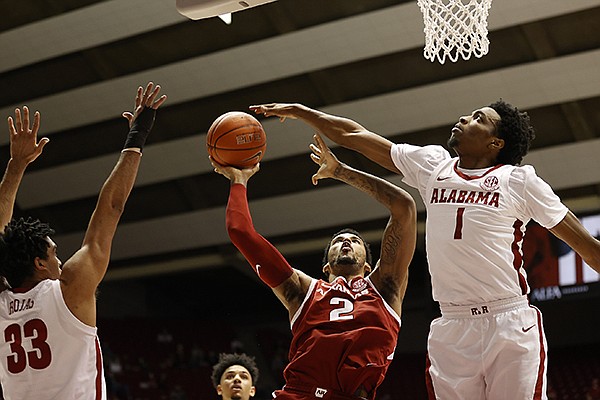 Eric Musselman has been concerned about the perimeter defense of the Arkansas Razorbacks.

It’s gone from one of the best in the country a year ago, to not very good most of this season, to pitiful Saturday in a 90-59 loss to the Alabama Crimson Tide.

He’s probably full-out worried now after the Tide hit 15 of 36 three-pointers to outscore the Hogs behind the arc 45-12.

The Razorbacks have tended to rely on the three against teams that are physical and play strong defense. They resisted that Saturday, although it didn’t really matter.

Alabama took the lead on a three-pointer with 18:24 to play and never looked back on the way to a 42-19 halftime lead.

If not for Razorback freshman Moses Moody, it would have been much worse. He finished the half with 14 points on the way to a career-high 28.

The Hogs played better in the second half but were still outscored in both halves. Alabama cleared its bench with more than three minutes to play.

Take nothing away from Alabama: The Tide are looking like the SEC’s basketball equivalent to Alabama football.

They played hard and smart.

They are strong and physical, something the Hogs struggled with against LSU and Missouri.

That’s probably why Musselman decided to push them hard in practice Thursday.

It might help somewhere down the road, but Saturday the Tide dominated every aspect of the game.

With the help of 8-0 and 9-0 runs, Alabama built an insurmountable lead as the Hogs turned the ball over constantly.

It is hard to score without the ball. And if you give it away in the SEC, it is going to bite you on the backside hard.

Arkansas settled down and finished with 18 turnovers, but that’s too many, especially for a team that isn’t fast enough to make big comebacks.

Nor do the Hogs have the depth.

Alabama had 11 players score, and seven different guys hit a three. The Razorbacks had eight score, but only Moody and Tate scored more than five points.

In what is becoming a habit, the Razorbacks started slow. And like against LSU on Wednesday, they got even slower before at least taking part in the game.

Justin Smith, who had surgery three weeks ago, started and played 18 minutes.

The Hogs have missed his presence inside. It was obvious Saturday he is healthy enough to play but not 100%.

Musselman stresses unselfish play and lots of passing, but the Hogs tallied only eight assists. When you have more turnovers than assists, it is usually a bad result.

Since starting SEC play, the Arkansas defense has not been great.

Maybe part of that is the league has more athletes to contend. The Hogs have some athletes, but they have struggled with teams that are more athletic and physical.

There was no key turning point before the game started going south, which happened in the first two minutes and just got worse until intermission.

If the Hogs had played the first half like the second, they still would have lost, but it wouldn’t have been a 31-point loss to a football school.

The Razorbacks return home this week for a game with Auburn, who they beat earlier in the season. Right now, they need a win almost as much as they need air.

The last two efforts by the Razorbacks were not good enough on either end of the court.