Repeat offense: Hogs' dud at Alabama like LSU all over 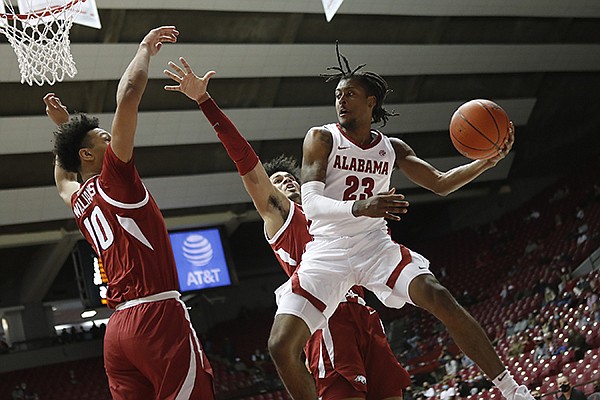 For the Arkansas Razorbacks, Saturday’s game at Alabama seemed like a repeat of their performance at LSU earlier in the week.

That wasn’t a good thing.

Alabama pounded the University of Arkansas 90-59 at Coleman Coliseum in Tuscaloosa, Ala., after the Razorbacks absorbed a 92-76 loss to LSU on Wednesday night.

Alabama’s 90-59 victory over Arkansas on Saturday tied for the Razorbacks’ third worst in an SEC game.

Here is a rundown of the 11 largest margins of losses to an SEC team since the Razorbacks joined the conference for the 1991-92 season:

Neither game was in doubt after the first few minutes.

“Clearly we have not been good the last two games,” Arkansas Coach Eric Musselman said. “We’ve got to identify our problems and work on them.”

The 31-point loss Saturday matched the third most-lopsided for the Razorbacks against an SEC team since joining the conference for the 1991-92 season.

“I’ve gone back-to back games where I didn’t have enough timeouts,” Musselman said. “And you can go back — whether it was prior to me coming to Arkansas or last year — I usually like guys to kind of play through the flow.”

When Musselman called his first timeout Saturday with 12:35 left in the first half and the Tide leading 17-5, Alabama Coach Nate Oats reminded his players the Razorbacks won 82-78 at Coleman Coliseum last season after trailing 12-0.

“They flipped the whole thing around and ended up winning the game,” Oats said. “So we talked about that — what happened last year after we got up big.

“I said, ‘We’ve got to keep guarding like we’re guarding and just keep our foot on the pedal.’ ”

There was no comeback for the Razorbacks (10-4, 2-4) this time as the Tide kept pouring it on.

“They made a lot of shots,” said freshman guard Moses Moody, who led Arkansas with a season-high 28 points. “That was the main thing that they did.

“Everything was falling for them. Everybody had a good day.”

Alabama hit 15 of 36 three-pointers compared to 4 of 17 by the Razorbacks.

“I certainly think that our execution defensively was not very good at all,” Musselman said. “As far as the game plan and taking away the threes and trying to take away layups.”

Alabama won its seventh consecutive game since losing to Western Kentucky 73-71. It also stopped a six-game losing streak to the Razorbacks, who suffered their first loss to the Tide since 2014.

Moody scored 14 of Arkansas’ first 15 points before senior guard Jalen Tate became the second Razorback to hit a basket on a jump shot with 4:49 left in the first half that cut Alabama’s lead to 33-17.

Tate finished with 10 points, 4 rebounds and 3 assists and had 6 of Arkansas’ 18 turnovers, but Musselman said two of the turnovers credited to Tate resulted from teammates dropping passes.

“There’s some guys on our stat sheet who have zero turnovers and guys drop passes and stuff,” Musselman said. “So I already know without going back through the film that two of those turnovers were not [Tate’s].

“But it’s really when he’s not on the floor that not having the point guard has really been the biggest issue.”

Junior JD Notae, who also plays point guard, had 5 points on 2-of-7 shooting and 3 turnovers. Notae injured his right shoulder at LSU and missed Thursday’s practice, but Musselman said he was fine physically against Alabama.

“He was fully cleared,” Musselman said. “He was fine. He’s just got to take better care of the ball, and he’s got to follow his defensive assignments. He’s got to play a lot better.”

Arkansas senior forward Justin Smith, who missed the previous four games after undergoing right ankle surgery, was a surprise starter. He had 5 points, 1 rebound and 3 turnovers in 18 minutes.

Junior guard Desi Sills, back in the starting lineup after playing off the bench the previous two games, shot 1 of 8 and had 5 points.

“I thought Moses played well,” Musselman said. “He was aggressive. He did a good job coming off some screens.”

“Outside of Moody, they didn’t really get anybody going,” Oats said. “We switched a lot in the half-court [defense], so he got his 28 on all kinds of different guys.

“We didn’t go into the game saying, ‘We’re going to let Moody get his and lock everybody else out.’ We just had a plan for guarding everybody, and it ended up we didn’t do a very good job on Moody and we ended up doing a better job on everybody else.

“We’ve got to do a little bit better job on Moody the next time we play them.”

The Tide play at Arkansas on Feb. 24. By then Musselman hopes to have fixed the problems that plagued the Razorbacks at LSU and Alabama.

“We’ve got a lot of work ahead of us between now and our next game [against Auburn on Wednesday night] and between now and the end of the season,” Musselman said. “We’ve just got to continue to try to get these guys believing in themselves as best we can.”