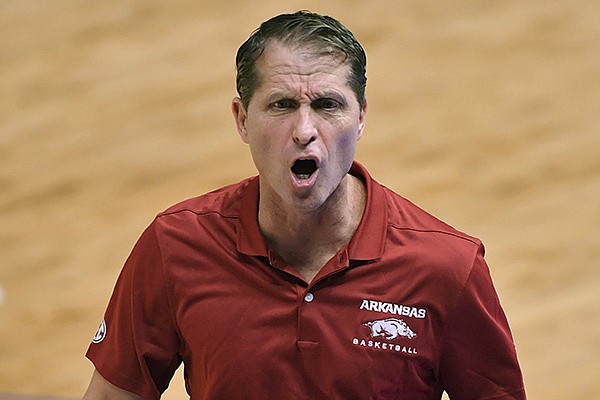 Arkansas head coach Eric Musselman yells towards his bench during the first half of an NCAA college basketball game against LSU Wednesday, Jan. 13, 2021, in Baton Rouge, La. (Hilary Scheinuk/The Advocate via AP)

FAYETTEVILLE — Moses Moody said better days are ahead for the University of Arkansas basketball team after a week that probably felt more like a year to the Razorbacks and their fans.

Moody, a 6-6 freshman guard from Little Rock who led Arkansas with a season-high 28 points against Alabama, said the Razorbacks can reverse the course of their season after back-to-back losses.

“I feel like at your lowest point you’re open to your greatest change,” Moody said. “We’re just coming together and trying to make it through these couple tough games.

The 31-point loss to the Tide was the most-lopsided in Razorbacks Coach Eric Musselman’s six seasons as a college head coach at Nevada and Arkansas, surpassing a 29-point loss by the Wolf Pack at Wichita State, 98-69, on Dec. 22, 2016.

The 59 points for the Razorbacks matched their fewest under Musselman along with a 73-59 loss at Florida last season.

Alabama enjoyed its largest margin of victory in 64 meetings with Arkansas, surpassing an 83-58 victory on March 8, 2014, which had been the last time the Tide beat the Razorbacks prior to Saturday.

“I don’t think there’s any doubt when you’re losing like we are that we definitely have some players that have lost some confidence and probably the team as a whole,” Musselman said. “The only thing I know is to continue to teach, try to build them up. I think that’s the only thing that you can do.”

The good news for Arkansas is that after two losses by a combined 47 points, the Razorbacks are No. 36 in the NCAA Evaluation Tool (NET) rankings.

“It’s far from too late,” Moody said of the Razorbacks having time to rally. ”I mean, it’s still the beginning of the season.

“So it’s the best time for something like this to happen so we can learn from it now instead of later.”

Arkansas is back home to play Auburn (8-6, 2-4) at Walton Arena on Wednesday night.

“We can be building from [the losses] so we have something like this to look back on in the future and say we don’t want to end up back where we’re at now,” Moody said. “You can look at it as a positive … and this is going to help put us on the path for a great season.”

Before the Alabama game, Musselman was asked about the Razorbacks not letting the LSU loss linger.

Now the Razorbacks need to make sure they flush the Alabama loss quickly to focus on Auburn.

Musselman said before the game that had to be the mindset regardless of the outcome.

“After the Alabama game, on the plane, we’ll dissect the game win, lose,” Musselman said. “We’ll go through it as a staff Sunday and then on Monday we’ll be worried about our next game on Wednesday.

“That’s just how you’ve got to approach things.”