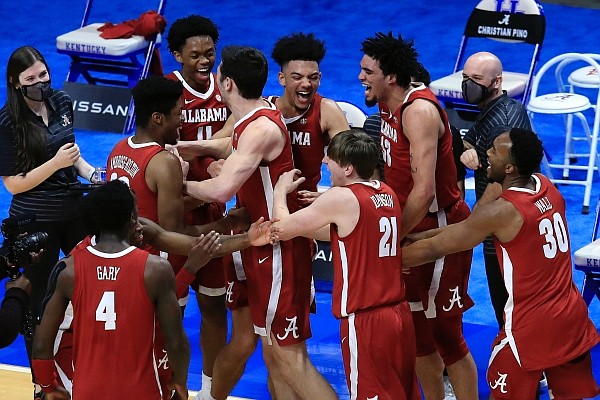 Alabama is making headlines with its blistering SEC start, while Kentucky’s struggles are leading to increased scrutiny in the Bluegrass State with the conference schedule hitting the one-third mark after Saturday.

The Crimson Tide’s 6-0 start to SEC play is their best since the 1987 team won the league regular season, and its seven-game winning streak is its longest since the 2011-12 season.

Alabama went 2-0 last week in dominating fashion, thrashing Kentucky 85-65 at Rupp Arena on Tuesday before dismantling the University of Arkansas 90-59 at home in their largest winning margin in the series.

Those performances vaulted the Crimson Tide to No. 18 in Monday’s Associated Press Top 25 poll. Alabama joined No. 6 Tennessee and No. 19 Missouri as the SEC teams in this week’s poll.

During a timeout with the Crimson Tide ahead 17-5 against Arkansas, Alabama Coach Nate Oats pointed out to his team that the Razorbacks had rallied from a 12-point deficit (12-0) to beat them at Coleman Coliseum last year.

“We talked about what type of character would we have after the big win at Kentucky,” Oats said. “We knew Arkansas was going to bring everything they had. Our guys responded great. We were up on them big early in the game last year and they flipped the script on us and won.”

Alabama (11-3) will continue its series of high-profile Tuesday games tonight on the road at LSU (10-2, 5-1), which also drubbed Arkansas last week. The last two weeks, the Crimson Tide thumped Florida 86-71 in a battle of SEC unbeatens, then notched the 20-point win at Rupp Arena in another matchup of teams who were undefeated in league play.

Jerry Palm of CBS Sports had five SEC teams in his Monday NCAA Tournament projection, and it did not include Arkansas, which is No. 35 in the NET rankings but is coming off back-to-back blowout losses at LSU and Alabama.

The highest-seeded SEC team for Palm was Tennessee on the 2 line. That is followed by 3 seed Missouri, 5 seed Alabama, 7 seed LSU and 10 seed Florida.

Kentucky’s six-year streak of making the NCAA Tournament is in serious jeopardy with a 4-8 record and No. 97 spot in the NET rankings.

The Athletic’s Kyle Tucker wrote a hyper-critical article after Kentucky’s 66-59 loss at Auburn on Saturday that was spiced with a series of “What the hell are you doing, John Calipari?” interrogatives interspersed with issues that have cropped up in the Wildcats’ last two games.

Among them were Calipari’s allocation of minutes and his comments to back up that usage.

Tucker questioned why freshman Dontaie Allen played but 23 minutes and did not start the second half at Auburn while amassing a team-high plus-11 in the plus/minus ratings.

In the meantime, Tucker wrote, freshman wing player and five-star signee Brandon Boston played 27 minutes while shooting 2 of 9 and having 5 turnovers. Boston is shooting 34.7% on the season and 17.5% from three-point range.

Tucker also criticized Calipari’s lack of adapting to the growing emphasis on three-point shooting, saying the Wildcats’ summer tag-line of “Built Different” now sounds like “an excuse for why he can’t play modern basketball.”

The Wildcats went 1-6 in nonconference play to open the season before winning three in a row to start SEC play, including road games at Mississippi State and Florida. Kentucky travels to Georgia on Wednesday before hosting LSU on Saturday.

Home teams are just 19-17 in SEC league play thus far. Road teams had a 12-12 record heading into last week before home teams rallied for a 7-5 record to edge ahead, bolstered by five consecutive wins by the home team in the last five completed games Saturday.

Alabama (3-0), LSU (4-0) and South Carolina (1-0) are the only remaining SEC teams with an unblemished home record in league action.

Petty, a 6-5 senior from Huntsville, Ala., averaged 20 points, 4.5 rebounds and 4.5 three-pointers made per game in wins over Kentucky and Arkansas and was named SEC player of the week. His 9-of-16 (56.3%) three-point shooting pushed him into Alabama’s all-time lead with 265 made three-pointers.

Johnson, a 6-1, 190-pounder from Atlanta, was named freshman of the week after averaging 17.5 points and shooting 51.9% from the field and 66.7% from three-point range in two games. He scored 21 points against Auburn, the third most by a Georgia freshman making his debut behind Dominique Wilkins and Anthony Edwards.

Alabama has more than doubled its opponents in three-pointers made during its seven-game winning streak.

The Crimson Tide have 81 made three-pointers and limited opponents to 39 during the long winning streak, capped by a 15-4 margin over Arkansas on Saturday.

Virtually every basketball program across the SEC sent out a Twitter message related to Martin Luther King Jr. Day on Monday.

The Arkansas Razorbacks’ social media accounts sent out a message with links to MLK Day events around Northwest Arkansas.

The first of two Egg Bowl basketball games will be played tonight at 8 at Humphrey Coliseum on the Mississippi State campus.

Auburn’s 66-59 win over Kentucky made it four seasons in a row for Coach Bruce Pearl’s team to beat the Wildcats.

“Beating Kentucky is historic,” Pearl said. “I think you’re judged by how you do against the best teams on your schedule, and certainly Kentucky is going to always be as good as anybody on our schedule.

“Beating Alabama is important, beating Georgia is important. So it matters. We want to make history. I think before I got here, they had lost 17 in a row or something like that. We played Kentucky at home three years in a row, and the reason why we’ve got them at home is because TV wants the Auburn-Kentucky game because it is competitive. And our program has been one of the top-five programs in the SEC over the last four years or so. So it’s great to make history.”

Missouri and Tennessee face off Saturday in a battle of two of the SEC’s three ranked teams. The No. 19 Tigers will visit the No. 6 Volunteers at 7:30 p.m. in a game that will be televised on the SEC Network.

The Tigers will get a chance to avenge a 73-53 home loss to Tennessee on Dec. 30 in the conference opener for both teams that gave the Vols a 7-0 record and snapped Missouri’s 6-0 start.

Ole Miss shot a sturdy 51% from the floor in Saturday’s 78-74 home loss to Georgia. The problem was the Rebels’ accuracy from three-point range and the free-throw line was a mess.

The Crimson Tide appear in the game of the week for the third consecutive week in a matchup of perhaps the two most-talented teams in the league. Alabama whipped Florida and Kentucky the past two Tuesdays. LSU’s only loss since Thanksgiving was an 83-79 setback at Florida on Jan. 2.

Time before Kentucky scored its first points, on a Dontaie Allen dunk, in its 66-59 loss at Auburn on Saturday

“Our guys deserve to be ranked but that’s not up to us.” — Alabama Coach Nate Oats after Saturday’s 90-59 win over Arkansas

“They’re not just leading the conference, they’re playing as well as anyone in the country right now,” LSU Coach Will Wade on Alabama

“We defended the way you defend to win games and no one wanted to shoot. They passed up until I yelled at them to shoot the ball. We missed wide-open shots and we had our chances.” — Kentucky Coach John Calipari after loss at Auburn

“Allen Flanigan was a man out there in every which way: rebounding, defensively, attacking the rim, using his physicality, willingness to take big shots, 8 for 8 from the foul line.” — Auburn Coach Bruce Pearl on former LR Parkview player