Arkansas still can be more than a tease 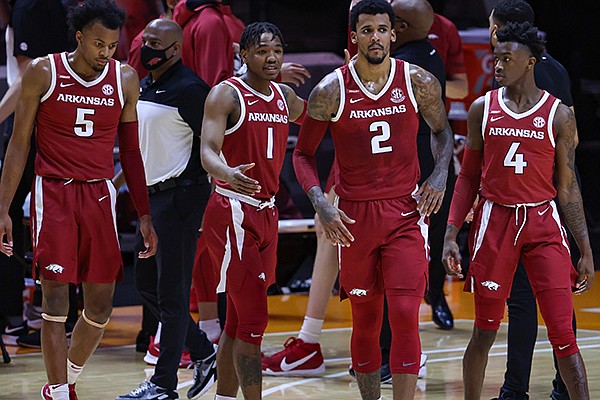 Arkansas players break a huddle during a game against Tennessee on Wednesday, Jan. 6, 2021, in Knoxville, Tenn. (Randy Sartin/USA TODAY Sports via Pool)

It hasn’t been easy for Arkansas Razorback fans the past 20 years.

There’s been more dashed hopes than ever imagined.

The once loud and proud basketball program that no one wanted to play in the NCAA Tournament — and definitely not in Walton Arena — faltered under misguided hires.

The closest to stability was when Mike Anderson was roaming the sidelines, but Mike was never Nolan Richardson.

There is only one Nolan Richardson.

Write that down and try not to forget it, although in 2016-17 Anderson was 12-6 in SEC play but had to face North Carolina — when it was one of the dominant teams in the country — in the NCAA Tournament.

In the past 20 years, the Razorbacks often would win enough nonconference games to get people’s hopes up. Then in SEC play, where even the worst team is better than most of the Hogs’ nonconference opponents, going .500 was about the norm.

Usually there were no NCAA Tournament invites, and the trips normally were short when there were.

Which brings us to just about the midway point of this season.

Arkansas is 10-4 overall, 2-4 in SEC play and has 13 scheduled games remaining. The Razorbacks are coming off a horrible road trip. John Candy and Steve Martin had a merry-go round ride in the movie “Planes, Trains and Automobiles” compared to how things went for the Hogs in Baton Rouge and Tuscaloosa.

They lost by a combined 47 points, and anyone who watched knows it could have been much worse.

More than likely, that was the toughest stretch of the season for the Razorbacks. They have lost four of their last five, but three of those teams are ranked and all appear headed to the NCAA Tournament.

After the 90-59 beat down by Alabama on Saturday, Coach Eric Musselman was so frustrated he could barely take his eyes off a copy of the box score in his postgame Zoom conference.

This is where the Razorbacks are missing Isaiah Joe, who was an outstanding shooter but also a great defender.

He had lateral quickness, which is something in short supply this season.

It only takes someone blowing by you for an easy layup a couple of times before you are going to lay off too much.

Musselman also talked about point guard play, which hasn’t been stellar. Arkansas had only eight assists in each game against the Tide and Tigers.

In their win over Georgia, the Razorbacks had 24.

Keep in mind that only two players on this roster had ever played a road game in the SEC before this season: Desi Sills and Ethan Henderson.

Everyone else is getting educated on the nuances of travel, strange gyms and a new routine.

Crowds aren’t making much difference this year because of covid-19 restrictions, but it isn’t the same as being at home.

The final 13 games — including one at Oklahoma State in the Big 12-SEC Challenge — are all winnable, but only if the players decide to listen to the coaches and perform their roles.

On a positive note, Justin Smith returned Saturday. The transfer from Indiana has played in big games and tough road games.

His leadership has been missing, but he’s back for the most important part of the schedule.