Hogs urged to play with sense of joy, confidence 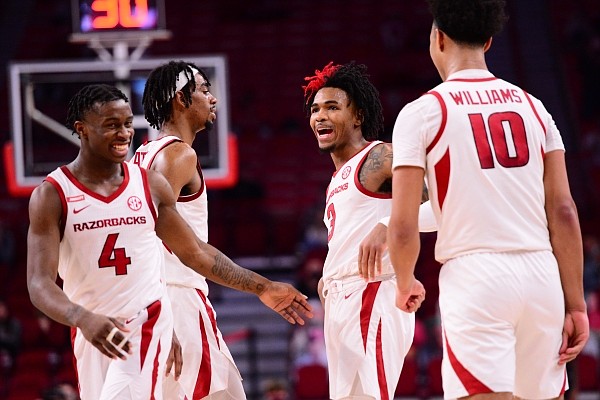 FAYETTEVILLE — Early in his radio show on Monday, Arkansas coach Eric Musselman said he believed his team was ready to hit the reset button.

That appears to be what the Razorbacks need after back-to-back blowout losses on the road to LSU and Alabama last week. To truly wipe the slate clean beginning Wednesday against Auburn, Arkansas must put its previous losses out of sight and out of mind.

Asked what he has found throughout his career to be the most effective ways to refocus a team following a rough stretch, Musselman alluded to an internal belief in the group as a whole and in each individual’s play.

“Then defensively, you’ve got to have confidence in your lateral mobility to maybe take away the 3-point shot and to have belief there’s a teammate waiting for you on the back side.”

Musselman noted the Razorbacks had a “good practice” on Monday following a day off after the loss to the Crimson Tide. A portion of his message to the team in preparation for Auburn revolved around getting back to playing with a sense of joy and swagger.

Both were noticeably absent in the team’s third week of SEC play and impacted the on-court product.

Against LSU and Alabama, Arkansas scored at a dismal .78 point-per-possession clip, according to HoopLens, and allowed 1.06 PPP.

“How do we figure out guys enjoying playing? And then also playing with confidence?” Musselman said. “We’ve got to try to build (confidence) up and we need a couple of shots to fall. And then both sides of the ball, if you’re not defending at a high clip, you can’t let that affect your offense, and then vice versa.

Last season, the Razorbacks hung their hat on valuing the basketball, defending the 3-point line and being a high-volume free throws attempted team. To this point in Musselman’s second season at Arkansas, it lacks a true calling card due to injury and inconsistent play from rotation pieces.

The Razorbacks, 2-4 in conference games, hope to develop an identity in the coming weeks against a more favorable stretch of their SEC schedule — Auburn, at Vanderbilt, Ole Miss, Mississippi State, Texas A&M. Only the Bulldogs have a winning record in the league at 4-2.

The other four teams are a combined 5-16.

“I think any time you have a player miss games, your identity is going to change,” Musselman said. “Again, I’m not using that as an excuse at all, because everybody in the country goes through injuries. From an identity standpoint, look, we’ve lost to three ranked teams, one team ranked in the top 10, and two teams that are playing as good as any two teams in the country, so we’ve got to regroup.

“We’ve got to understand that there’s still a lot of basketball to be played, and our identity when we bring back whatever we brought back — 20% of (our) scoring or 18 or 15 or 4, I don’t know what the percentage is — but you’re going to go through some ebbs and flows in trying to figure out your identity, especially in a covid year.”