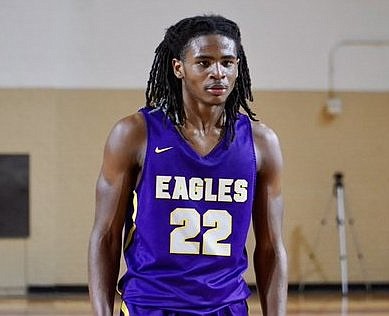 The University of Arkansas basketball team likely will be one of the top schools for an ESPN top 25 prospect when he announces his list.

Junior Cason Wallace, 6-4, 180 pounds, of Richardson, Texas, is high on the Razorbacks for several reasons.

ESPN national recruiting director Paul Biancardi rates Wallace a high 4-star recruit, the No. 6 shooting guard and No. 23 overall prospect in the 2022 class. Biancardi likens him to a current NBA player.

Wallace has 13 scholarship offers from schools such as Arkansas, Texas, Texas A&M, Auburn, Arizona, Oklahoma, Texas Tech, Baylor and others.

His relationships with Eric Musselman and associate head coach David Patrick, along with the vast NBA experience on the coaching staff, are big draws for Wallace.

Wallace is unsure on his other top schools.

“I don’t know because I haven’t made a top three list yet, but I know they’re [Arkansas] going to be on it,” he said.

“He texts me before and after a game and gives me a rundown on how I did,” Wallace said. “I think he’s watching the games because he tells me exactly what plays and what time I did it. It’s pretty cool.”

He said Musselman is the lone coach to give him a detailed breakdown of his games.

“It makes me feel like I’m a priority and they really want me there,” Wallace said.

He said he talks to Patrick the most. Their conversations aren’t always basketball related.

“He’s got some energy,” Wallace said. “It’s always cool talking to him. It’s just like we don’t have to talk about basketball. Every time we talk, it’s nothing boring. We’re going to be laughing. It’s a genuine bond.”

He got a good look at the Jones academic center and other parts of the campus thanks to a virtual tour with Patrick.

“It’s a pretty nice-looking campus,” Wallace said. “It’s not too big, but it’s not like crammed in together. Basketball and all the sports things are right there. They got a nice cafeteria area for the teams, and then they have study hall in the building. I thought that was pretty cool.”

Wallace stays on top of his grades at his mother Kimberly’s urging.

“Ever since I got into school and playing sports, my mom always made me keep an 80 or above,” Wallace said. “Anything under that I can’t play so grades will never be an issue with me.

“Even if I have a 79, she’s shutting everything down. No games, no workouts, no practices because she knows it hurts people in the long run, and once I go off to college and I’m on my own I have to stay on top of my grades.”

His brother Keaton Wallace is a two-time All-Conference USA selection at Texas-San Antonio. The senior guard is averaging 13.3 points, 4.3 rebounds and 3.3 assists a game for the Roadrunners this season.

Wallace said his mother is a regular at his and his brother’s games.

“She always provides for us, and she tries not to miss a game,” Wallace said. “She’s made almost every game we played. I have to give her props for that.”

“I think I would be good in broadcasting and podcasting,” Wallace said. “That’s one thing that keeps me close to the basketball world.”