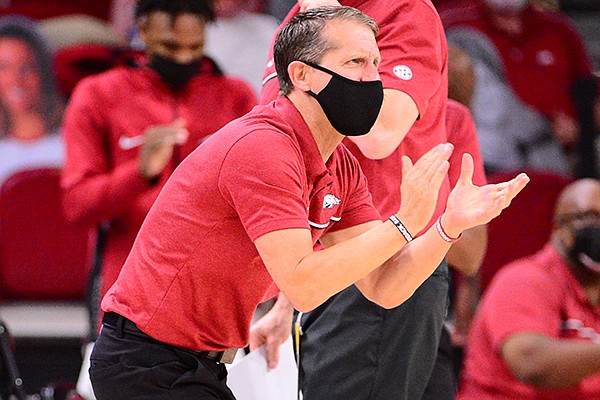 Arkansas coach Eric Musselman is shown during a game against Texas-Arlington on Wednesday, Dec. 2, 2020, in Fayetteville.

FAYETTEVILLE — All indications are that Arkansas’ road game against Vanderbilt on Saturday will be played as scheduled.

The Southeastern Conference postponed the Commodores’ Wednesday night game against Texas A&M because of a combination of positive covid-19 tests, contact tracing and subsequent quarantining inside the Vanderbilt program.

Yurachek said he had not received an update on the status of Saturday’s game as of Thursday morning, but signs Wednesday night pointed toward the teams playing.

“The basketball administrator for us, Clayton Hamilton, will be in communication with their basketball sport administrator, as well as the league office,” Yurachek said.

On Thursday afternoon Musselman said he had not been informed of anything regarding the Commodores, other than they were forced to postpone their game on Wednesday. Vanderbilt had to postpone a game due to covid-19 issues on Jan. 12 against Tennessee.

“We’re going to walk down (to the practice floor) in 23 minutes and 47 seconds and prepare for Vandy,” Musselman said shortly after 2 p.m. “Yes, we are anticipating playing the game.”

Covid-19 problems are not only affecting the Vanderbilt men’s program. The Commodores women’s basketball team announced Monday it was discontinuing the season because of a depleted roster.