Arkansas roars back from 19-point deficit to sweep Auburn 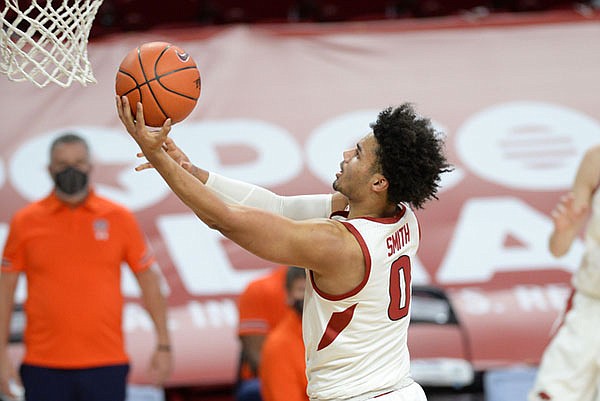 Arkansas forward Justin Smith goes for a layup during a game against Auburn on Wednesday, Jan. 20, 2021, in Fayetteville.

FAYETTEVILLE — After blowing a 19-point lead, Auburn had a shot to beat the University of Arkansas.

But the Razorbacks walled up Sharife Cooper when it counted most and held on to beat the Tigers 75-73 on Wednesday night in Walton Arena.

Arkansas was clinging to a 74-73 when Auburn got the ball back with 25.2 seconds left.

Cooper, a 6-1 freshman guard who scored a game-high 25 points, had the ball at the top of the key, got a screen and drove to the basket.

Cooper got off a wild shot that didn’t hit the rim and bounced high off the backboard.

“Our big thing was just to wall him up and make sure we went vertical,” Arkansas Coach Eric Musselman said. “Under no circumstances did we want free throws attempted. I mean, it was demanded that there’s absolutely zero chance that we put them on the foul line. And we just had to go vertical, kind of converge on him.

“We felt like he would take the shot, even if somebody else might have been open for a kick-out. So it was important for us to kind of clog the lane and not let him be the guy to finish the game.”

Moody got the rebound and was fouled by Cooper with 2.4 seconds left. He missed the first free throw and hit the second to make it 75-73.

Auburn guard Allen Flanigan, a sophomore from Little Rock Parkview, had a desperation three-point attempt fall short of the basket at the buzzer.

“It worked the previous play, so we went back to it,” Cooper said of his driving attempt to try to put Auburn ahead. “Just driving down the left, I saw Smith come up and challenge the shot.

It looked like the game might be over in the first half when Auburn led 36-17 and Arkansas was 3 of 20 from the field. But the Razorbacks hit 8 of their final 10 shots of the half and pulled within 43-31.

The teams traded the lead four times and had two ties over the next four minutes before the Razorbacks went ahead for good.

Moody — who had been 0 of 7 from the field — scored his first points on a rebound basket after a missed free throw by senior guard Jalen Tate to put the Razorbacks ahead 58-56.

“I thought Moses’ play — because he was really, really struggling — was a huge play for us,” Musselman said.

Junior guard Des Sills, who led the Razorbacks with 22 points off the bench, hit two free throws, then Smith dunked an alley-oop pass from Tate for the six-point cushion.

“The lob is a play that we have that we do not run very much,” Musselman said. “It’s kind of a late-clock play. Jalen read Justin.”

“I don’t think a team could have played any harder than we did in the second half,” Musselman said. “I would take that effort and the energy they played with anywhere against anybody.

“When you play like that, I thought they really laid it on the line in a game we had to win.”

It was the third consecutive game in which the Razorbacks fell behind by at least 19 points in the first half, but unlike losses at LSU (92-76) and Alabama (90-59) last week, they found a way to rally.

“When you go through a stretch like we have, you start to really take a look at yourselves in the mirror and try to do what you can to come together,” said Tate, who had 14 points, 5 assists and 4 rebounds before fouling out with 2:08 left. “Once we got down in the first half, we just really wanted to take a stand at that point.

“We all came together in the first half and tried to say, ‘Let’s go out here and leave it all on the court.’ We did a great job of doing that.”

The Razorbacks, who opened SEC play with a 97-85 victory at Auburn on Dec. 30, swept a two-game series with Auburn for the 12th time since the Razorbacks joined the SEC for the 1991-92 season.

Smith, in his second game back after missing four games recovering from ankle surgery, had 10 points. Freshman guard Davonte Davis had 10 points.

“Disappointing loss,” Auburn Coach Bruce Pearl said. “Kind of let one get away.

“Great first 16 minutes of basketball on the road. Played really well at both ends. Last three or four minutes of the first half, we kind of took our foot off the gas and gave Arkansas some confidence, and they just kept that through the halftime.”

Musselman said the Razorbacks, who outscored Auburn 48-32 on points in the paint, did a good job of getting baskets on back-door cuts.

“Auburn is one of the best shot blocking teams in the entire country, but we did not want to settle [for jump shots],” Musselman said. “We wanted to put pressure on their defense as much as we could and I thought we did that.”

“I did not want to come out in the second half and see long rebounds lead to long run-outs for Auburn,” Musselman said, referring to missed three-pointers. “If you attack off the dribble-drive and get to the rim, I think it allows your defense to get a little more set. So certainly that was part of some of the stuff that we talked about internally at halftime.”