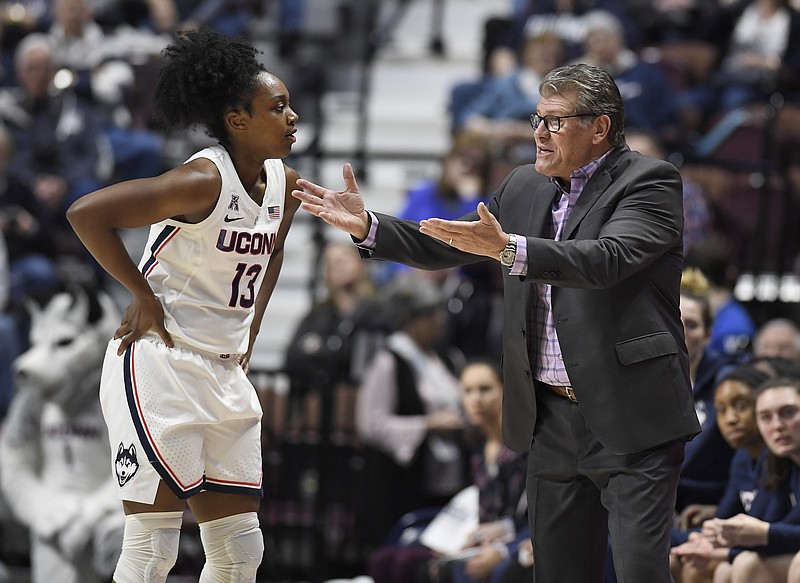 FAYETTEVILLE — Arkansas women's basketball coach Mike Neighbors has made it clear he wants to play as many games as possible this year, and he wants those games to come against the best competition possible.

But even Arkansas athletics director Hunter Yurachek wasn't sure about Neighbors' latest addition to the schedule — against Connecticut next Thursday at 4 p.m. at Bud Walton Arena.

"Mike Neighbors sent a text to me when Vanderbilt dropped out of the season and wanted to know if he could replace Vanderbilt with Connecticut," Yurachek said. "Quite honestly I thought he was kidding when he sent me that text."

Neighbors wasn't joking. In fact, he'd been preparing for this moment since the beginning of the season.

"When they announced (the protocols for the season) you knew it would be inevitable, probably, that you would have a cancelation or a postponement," Neighbors said. "So we kind of developed a little alliance, text message group, of a bunch of coaches that were just willing to play if that opportunity came up, and we just all kind of kept up with each other."

Arkansas associate head coach Todd Schaefer also kept a tally of teams that needed games and on which dates they needed them. That allowed the Razorbacks to move quickly if a game was canceled or postponed.

When Neighbors, who was snacking on M&M's and a Pepsi before the press conference, was told what Yurachek said about his scheduling, he laughed and said sometimes Yurachek just likes to check on him.

"He checks on my sanity quite a bit," Neighbors said. "I am a new father at my age. Y'all saw what I was eating; I don't have the healthiest diet. I think he just does some wellness checks on me."

From the outside looking in it might seem that Neighbors needs the checkups. With the addition of UConn, the Razorbacks will have played five teams in the top 10 of The Associated Press poll (Baylor, South Carolina, Texas A&M and Maryland), but this was the plan all season long. When Neighbors talked to his seniors they made sure he knew they wanted to play the best.

"If we start to lose games, what direction do y'all feel most comfortable going in?" Neighbors said. "And I tell y'all it was absolutely unanimous. It wasn't like one person speaking up and then everybody just piggy backing off that one person. They were like, 'Best team we can find.' I would check in with them periodically, and I checked in with them after the South Carolina game, just to make sure that our confidence is in the right place. That there weren't any second thoughts about the type of opponent that we needed to replace that (game) with. Again it was unanimous: 'Find us the best team you can play.'"

Other teams Neighbors contacted were Arizona, Ohio State, Louisville, South Florida and UCLA. But when UConn was available it was a no-brainer for Neighbors.

"We had a few other people reach out, but none of them had 11 National Championships to speak of," Neighbors said, "so it was UConn from the get go."

Once the opponent was found, Neighbors said the contract was finished "literally overnight."

Less than 1,000 tickets are available for the game as of Thursday afternoon, Neighbors said.