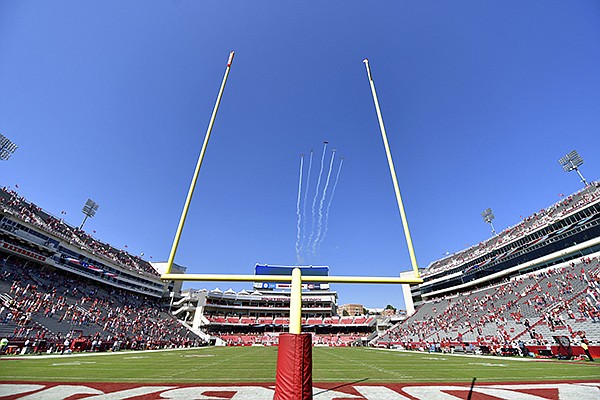 A flight team flies over Donald W. Reynolds Razorback Stadium prior to a game between Arkansas and Georgia on Saturday, Sept. 26, 2020, in Fayetteville. (AP Photo/Michael Woods)

FAYETTEVILLE — The University of Arkansas plans to sell football season-ticket packages with the thought that full capacity will be allowed for games at Reynolds Razorback Stadium later this year, UA athletics director Hunter Yurachek said Thursday.

Arkansas limited attendance to 16,500 per game at its 76,412-seat stadium in 2020, based on covid-19 spacing guidelines from the Arkansas Department of Health.

Attendance guidelines might be relaxed later this year once the covid-19 vaccine is more widely administered.

"We’re anticipating things returning to some sense of normalcy," Yurachek said. "That’s my crystal ball outlook of what I think right now.”

Arkansas' 2021 season should be released within the next 10 days, Yurachek said. The schedule will be released at the same time the SEC releases its schedule for the upcoming season.

Yurachek said the Razorbacks will begin a season-ticket campaign in late February or early March.

The Razorbacks have six games contracted for the upcoming season — against Rice (Sept. 4), Texas (Sept. 11), Georgia Southern (Sept. 18) and Arkansas-Pine Bluff (Oct. 23) in Fayetteville; against Texas A&M (Sept. 25) in Arlington, Texas; and against Missouri on Nov. 26 or Nov. 27 in Little Rock.

The game against Rice is expected to be the Razorbacks' season opener.

Arkansas' schedule will also include home games against Auburn and Mississippi State in Fayetteville, and road games at Alabama, Georgia, LSU and Ole Miss.

The Razorbacks went 3-7 in 2020 in their first season under coach Sam Pittman. Arkansas qualified for the Texas Bowl, but the game was canceled when its opponent, TCU, reported it did not have enough players to satisfy Big 12 roster requirements.