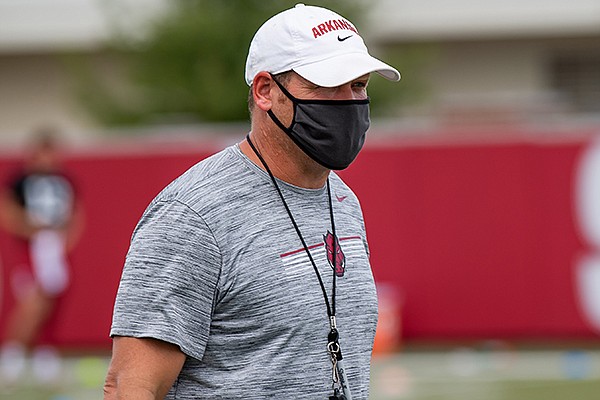 Under his guidance, Arkansas’ defense found success at various points during the team’s 10-game all-SEC schedule. That led to reported opportunities for Odom — a former head coach at Missouri — to leave for high-profile defensive coordinator jobs at Texas and LSU.

On Thursday, Yurachek spoke to the importance of Odom’s return for a second season with the Razorbacks in regards to the direction of the program under Sam Pittman. He referenced Odom's creative schemes that put Arkansas in positions to have success in Pittman's inaugural 3-7 season that followed consecutive winless campaigns in SEC play.

“Barry has that experience sitting in the head coaching chair in the Southeastern Conference and it’s been invaluable to Coach Pittman this year and it will be invaluable going forward,” he said. “Our student-athletes on the defensive side of the ball love him.

It is believed Odom will receive another raise in pay, but a contract adjustment has not been finalized. Odom is in the first year of a three-year contract with the Razorbacks that runs through the 2022 season.

He received a $100,000 pay raise to an annual salary of $1.3 million last year after he turned down interest from an unspecified SEC program, Pittman said in March.

Overall, the Razorbacks' defense showed modest statistical improvement in his first year. Arkansas allowed 34.9 points in 2020, down from 36.8 points allowed during a 12-game schedule that included four nonconference opponents the year before.

Arkansas' 18 takeaways — 13 interceptions — were two more than in 2019, but the Razorbacks' total defense was slightly worse, allowing 451.7 yards. In the team’s three SEC wins, it allowed 16 points per game and totaled 11 interceptions and 2 fumble recoveries.

“Just continuity in general among your coaching staff is very important,” Yurachek said. “Being able to retain all three of our coordinators, how Pittman has that set up with (offensive coordinator Kendal Briles, special teams coordinator Scott Fountain) and Odom was very, very important."

Arkansas strength and conditioning coach Jamil Walker is also returning for a second season. He was among a pool of candidates for the same position with the Gamecocks.

“That was really for (Stepp) to have an opportunity to return home,” Yurachek said. “Kenny Guiton will fill that role really, really well for us.”