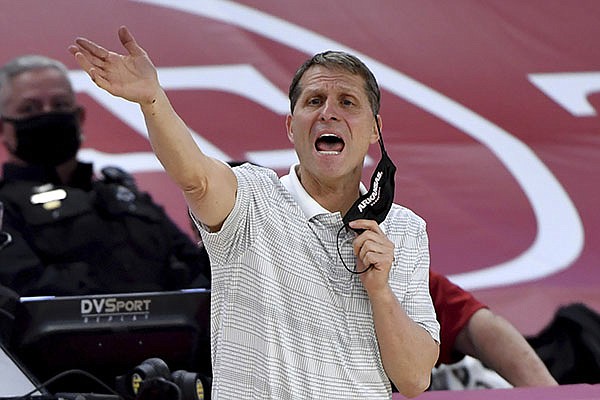 Arkansas coach Eric Musselman reacts after a play against Auburn during the second half of an NCAA college basketball game Wednesday, Jan. 20, 2021, in Fayetteville. (AP Photo/Michael Woods)

FAYETTEVILLE — The University of Arkansas basketball team’s comeback in a 75-73 victory over Auburn on Wednesday night was big, but Razorbacks Coach Eric Musselman has experienced overcoming bigger deficits to win.

Arkansas rallied from 19 points down in the first half, 36-17, to beat the Tigers.

When Musselman was Nevada’s coach, the Wolf Pack won at New Mexico 105-104 in overtime in 2017 after trailing by 25 points, 74-49, with 11 minutes left in the second half. Nevada tied for the eighth largest second-half deficit overcome to win a game in NCAA history.

“It’s the greatest win I’ve ever been a part of,” Musselman said after the game.

“It’s the happiest I’ve ever been in my life,” Musselman said after the victory advanced Nevada to the Sweet 16.

The Wolf Pack matched the second-largest deficit overcome to win an NCAA Tournament game along with Duke’s 95-84 victory over Maryland at the 2001 Final Four when the Blue Devils trailed 39-17 with 6:57 to play in the first half.

BYU had the largest NCAA Tournament comeback victory when the Cougars beat Iona 78-72 in a 2012 first-round game after trailing by 25 points.

“Over four years at Nevada, we had a pretty solid history of coming back, and our guys understanding that you’re never out of it,” Musselman said.

Arkansas’ victory over Auburn wasn’t an NCAA Tournament game, but the Razorbacks were desperate to win after losing four of their previous five SEC games, including 92-76 at LSU and 90-59 at Alabama last week.

“I mean, we could not lose that game [to Auburn],” Musselman said. “Just based on how the other two games had gone and knowing that we have to go back on the road.”

Arkansas, which will be back on the road to play at Vanderbilt on Saturday, trailed at LSU by 31 points in the first half and at Alabama by 25.

The Razorbacks got off to another bad start against Auburn, but managed to pull within 43-31 at halftime by closing with a 13-6 run in the final 4:02 of the half.

“We talked about trying to win that last four-minute segment, trying to give us some life, some breathing room,” Musselman said. “Down 12 points is really, really manageable.

“Even when we were down 19, I thought in our huddles we had a little bit different belief than we did the past two games.”

The 19-point comeback is believed to be Arkansas’ largest in a game at Walton Arena, surpassing the Razorbacks’ 65-63 victory over Alabama on Feb. 21, 2006 when they erased an 18-point lead by the Crimson Tide.

“I think the key to the comebacks is really just believing,” Musselman said. “I think it’s can you just reach mini goals each timeout?”

Musselman said the Razorbacks couldn’t look at the 19-point deficit to Auburn in its entirety.

“You’ve just got to say, ‘Allright, there’s a four-minute timeout coming and how do we set a tangible goal next time we meet that we’re falling under this umbrella of where we’ve got to be?’ ” Musselman said. “And then I think it’s important if you’re down 19, you’ve got to change something.

“Sometimes it works, and sometimes it doesn’t. But I think the big thing is just continuing to compete and not look at the scoreboard and think that you’re running out of time, because you can’t think that way.”