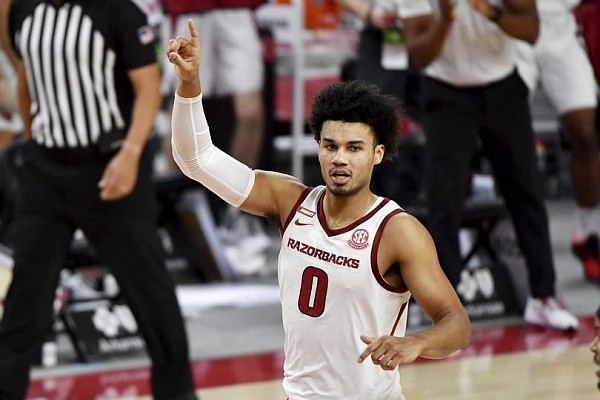 FAYETTEVILLE — Eric Musselman expected Justin Smith to be rusty and winded quickly at Alabama in his first game action since Dec. 30, and he was.

In 18 minutes against the Crimson Tide, Smith finished with 5 points, 1 rebound, 1 assist and 3 turnovers.

Four days later against Auburn, Arkansas’ second-year head coach thought the 6-7 forward, to a degree, would still be working to get into a rhythm on both ends of the floor but show signs of progress. Smith did just that.

The Indiana graduate transfer scored 10 points, grabbed 5 rebounds and 2 assists in the Razorbacks’ 75-73 come-from-behind victory over the Tigers. Less than three weeks after undergoing right ankle surgery, Smith was a plus for Arkansas and flashed improved mobility and explosiveness in 27 minutes.

His night was highlighted by a two-hand slam off a well-placed lob by Razorbacks guard Jalen Tate, who added five assists. A Desi Sills blindside screen freed Smith for the dunk that put Arkansas ahead 62-56 with 7:07 remaining.

Musselman noted the lob set is one the Razorbacks do not run often, and it is more of a play used in late-clock situations.

“I thought the lob dunk that Tate threw to him was kind of a momentum-type play for us,” Musselman said Thursday. “I thought the crowd was awesome. We felt them in the building, we felt their energy. Whether it was home or road, that was the first game that I felt like, 'Hey, there's people here,' and there was some pop in Bud Walton.

“I thought that dunk by Justin helped spearhead it.”

Aside from his highlight-reel dunk, Smith hit the offensive glass as he did in many of the Razorbacks’ first nine games of the season. With 4 offensive boards against Auburn, he has grabbed 3 or more in 7 of his 11 games played.

According to KenPom data, Smith has grabbed 12.8% of Arkansas’ available misses when on the floor this season. That mark ranks fifth among SEC players and No. 76 nationally.

His first offensive rebound and score early in the second half kicked off an 18-4 Razorbacks run.

“Offensive rebounding, he was really important for us,” Musselman said. “Still a little bit of rust offensively, but I certainly felt like his effort defensively and his effort on the offensive glass was something that we really needed.”

Musselman was particularly pleased with Smith’s play in helping limit Tigers guard Sharife Cooper’s avenues to get others involved. Not only did he contest Cooper’s potential game-winning layup with less than five seconds to play, he was regularly one half of Arkansas’ soft trap on the star freshman and recovered well once Cooper swung the ball to a teammate.

He entered the game averaging a shade under 10 assists through three games, but the Razorbacks slowed Cooper there. He recorded a season-low four assists and finished with nine passes that could have been assists.

“He's the key sometimes when we do things defensively, whether it's the backcourt trap or in the frontcourt,” Musselman said of Smith. “And whoever we put him on, for the most part, we don't have to worry about double teaming or shading an extra defender at him.

“He pretty much takes his assignment and does a really good job.”

Smith was feeling the effects Thursday of seeing an increase in his minutes. He and Musselman visited in the team training room, and Smith’s ankle was both swollen and sore, which was to be expected, according to a team trainer.

Smith will “not do much of anything” practice related leading up to Saturday’s scheduled game at Vanderbilt. Tipoff is set for noon on SEC Network.

“I’ve kind of felt like it would probably take two or three games, just like it does anybody, for the player to feel fully confident with the injury,” Musselman said.