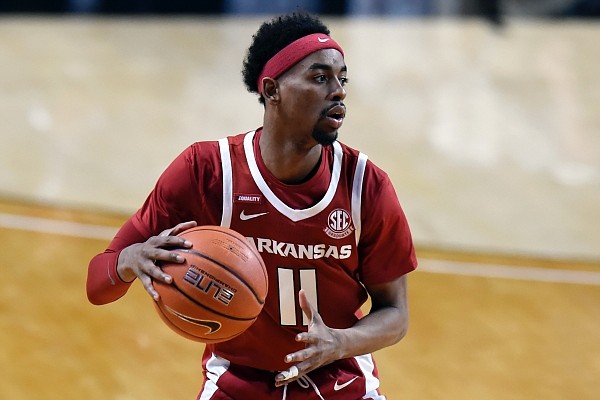 Arkansas’ victory at Vanderbilt on Saturday was likely therapeutic for the Razorbacks.

Led by 26 points from freshman guard Moses Moody and Jalen Tate’s 25 points and 8 assists, Arkansas coasted to a 92-71 victory over the Commodores, who were without their leading rebounder and second-leading scorer forward Dylan Disu due to contract tracing.

The game was never in jeopardy for the Razorbacks. They led for 39-plus minutes and did not trail. Arkansas got off to a great start offensively and consistently applied pressure with one of its more efficient performances of the season.

According to StatBroadcast, the Razorbacks scored on 42 of their 71 possessions and operated at a 1.296 point-per-possession clip. Arkansas also knocked down a season-high 57.1% of its shots.

“I think we really just stopped thinking,” Arkansas forward Justin Smith said. “I think we were thinking too much and were worried about making a mistake. We kind of got away from that and just said, 'Forget it.' We really just went out there and played our game and played how we know how.

“I think that's made a really big difference with our confidence, because once you kind of make plays, the confidence keeps growing as an individual and as a team. The more plays we make, the more confidence we're going to have.”

Moody was terrific at Vanderbilt, bouncing back in impressive fashion from a lackluster shooting game against Auburn on Wednesday. His first bucket against the Tigers did not come until the second half. Moody led all scorers at halftime with 13 points on 5 of 8 from the floor.

The freshman has now scored 25-plus points in three of the Razorbacks’ eight SEC games. And he grabbed a game-high eight rebounds — three offensive. Moody now ranks in the top 25 in the conference in offensive rebound rate (7.0%), per KenPom.

“I thought he was great around the rim. I thought he didn’t settle from three,” Arkansas coach Eric Musselman said. “I thought he ran the floor really hard today. I thought he really, really ran exceptionally well in transition. I thought his teammates did a good job finding him, and then obviously when you get three offensive rebounds, that’s going to give you a little more cushion for shot attempts.

Tate turned in his third eight-plus-assist game of the season and second in league play, and he finished with only one turnover — his lowest total in two weeks. Tate, whose 25 points are his most in a game since transferring to Arkansas, made his way into the top 10 in the SEC in assist rate in conference games (28.6%).

He also provided Arkansas a lift from the perimeter for the second consecutive game. Against Auburn and Vanderbilt, he was a combined 5 of 9 from 3-point range. He made a season-high three 3-pointers Saturday and is shooting 39% from deep in conference action.

Tate’s play Saturday could be described as aggressive. He matched a season-high with six 2-point scores on 10 attempts.

“He had six assists in the first half,” Moody said. "He's a ball distributor. He gets everyone else involved. Then, when he's in the lane, they know he's trying to get other people the ball, so it's easier for him to get buckets. It's a big help when he does."

Arkansas’ ball movement and flow offensively was stellar. The Razorbacks totaled 22 assists on 36 buckets. Each of the nine players who saw the floor finished with at least one assist.

Desi Sills, who had seven points, recorded four assists, his most since Dec. 12 vs. Central Arkansas.

Smith, Moody and JD Notae each had two assists, and Vance Jackson, Davonte Davis, Connor Vanover and Jaylin Williams had one apiece. As he did on Wednesday, Musselman credited his players for their activity and intentional movement away from the ball.

“I think we spent some time just talking about our opportunity break where we bring that thing down and we kick ahead and cut through and the ball goes through the trail man, and then to the second side and then back to the third side,” he said. “We added some cuts that maybe opened up some dribble drives.

“But I just thought the players shared the ball today really, really well. And we felt like transition offense would be a big key for us.”

Moody went a bit more in depth when asked about the backdoor cuts Arkansas has found success with in recent games.

The Razorbacks posted an offensive efficiency rating of 125.1, according to KenPom, their fourth-best figure of the season. That number in the 30-point win over Georgia on Jan. 9 was 120.9.

Smith, who is three weeks removed from surgery, continues to get better and more comfortable on his surgically repaired ankle. He grabbed seven more rebounds and added 12 points on 5 of 8 shooting. In his last two games, he has 12 rebounds — nine offensive.

The graduate transfer from Indiana said it felt great to take care of business with few hiccups in a game the Razorbacks were supposed to win. They brought their own energy, too, which was key. Musselman said he felt like there were 30 fans in attendance.

The official attendance was 83.

“Once you can start getting a couple (wins) in a row, it gets kind of hard to stop,” Smith said. “Hopefully we can use this momentum to keep going and take it game by game, and not really worry about the game that is coming after it. Just focus on that game and just keep doing what we're doing because it's working right now.”