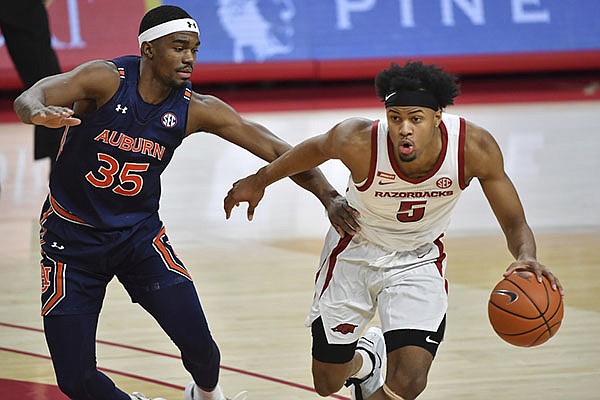 Arkansas guard Moses Moody (5) tries to get past Auburn defender Devan Cambridge (35) during the first half of an NCAA college basketball game Wednesday, Jan. 20, 2021, in Fayetteville. (AP Photo/Michael Woods)

FAYETTEVILLE — Do the math. It doesn’t add up.

Last Wednesday at Walton Arena against Auburn, Moody goes scoreless the first 29:02. He finished with a measly five points.

Yet during the second half Arkansas overcomes a 19-point deficit during the first half deficit and wins, 75-73.

Did he feel the game thrusted all on him?

“A lot of shots weren’t falling for the team,” Moody replied postgame in Tuscaloosa. “So we had to … I mean, a lot of the scoring was coming from me. It was just what my team needed me to do at that time.”

And it was, Arkansas Coach Eric Musselman said.

With Moody, struggling offensively, too, the Hogs needed something else against Auburn. They got it not just from junior guard Desi Sills’ team-high 22 points, but from Moody’s two remaining healthy freshman teammates.

Other than some shaky moments after point guard Jalen Tate fouled out, Davis played well offensively and defensively off the bench. He scored 10 points, all in the second half comeback from down 12 at intermission, plus totaled 4 rebounds and 2 assists in 20 minutes.

“Devo Davis did a great job for us in that middle part of the second half,” Musselman said.

Logging eight minutes off the bench first half minutes, Williams started the second half and never left the court. He contributed a game-high 7 rebounds, 7 points — including a three and an inspiring dunk — plus 2 assists, a steal and 2 blocked shots.

Only Moody among Arkansas’ freshmen was forecast as a possible NBA bound one and done.

Williams was expected to progress like a typical freshman but already proves untypical.

“Jaylin’s been awesome,” Musselman said. “I would say he’s ahead of schedule. He played an entire 20 minutes, which doesn’t happen in a second half of a really, really close game for a freshman big — for any big — whether it’s a senior even to play 20-straight minutes in a game that comes down to the wire. I did not want to take him off the floor.”

Musselman kept Moody on the floor 31-plus minutes even as Moses struggled.

It paid off. Off Auburn guard Sharife Cooper’s inside miss, Moody grabbed the game’s last rebound and was fouled with two seconds left sealing Arkansas’ triumph.

Seems the really good ones find ways to rise even when their shots don’t fall.