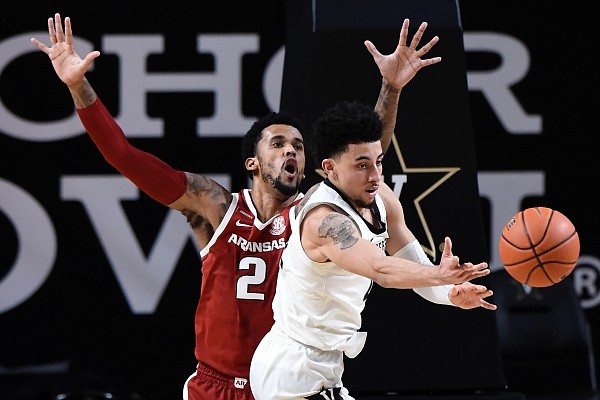 Playing an early game on the road against a winless team in SEC play that was missing key players, Arkansas could very well have fallen into a trap at Vanderbilt on Saturday.

But the Razorbacks jumped out to a 9-0 lead and led throughout a 92-71 win over the Commodores before a crowd of just 83 fans, which included only parents and family of Vanderbilt players. It was the smallest crowd the Razorbacks have played in front of in 40 years, according to HogStats.com.

Arkansas was coming off 75-73 win over Auburn in which it rallied from 19 down in the first half to snap a two-game losing streak.

The Razorbacks had been hammered by LSU and Alabama and fallen behind by 31 and 25 points, respectively, before intermission in those two outings.

“I think the biggest thing when you get down by large margin – obviously we did not play well at all at Alabama and didn’t play very well at LSU – so we had to kind of get out of our feelings and start to believe in ourselves,” Arkansas coach Eric Musselman said. “When we got down against Auburn, I thought we still had belief, but we just weren’t making shots and that affected us a little bit on both ends of the floor. When we made a couple of shots, I think the game really opened up for us.”

Musselman used a pre-game ploy Saturday to loosen up his team. He put cheese underneath each player's chair.

“We try to get creative, try to come up with new ideas,” Musselman said. “We did use cheese. It was taped underneath their chairs. I'm not saying it had one thing to do with the way we played, but certainly there was a few guys that got a good laugh out of it.”

It was something to remind Arkansas to put its play against Auburn out of mind.

“We brought out some cheese and just said, ‘Don’t take the cheese that you played well the last game. This is a new game, a new team.’ We just had a little fun pregame.”

The game was played before Arkansas' smallest crowd since a loss against Murray State in Bayamo, Puerto Rico, on Dec. 25, 1997, in the Puerto Rico Holiday Classic.

“Well, this one was really different,” Musselman said. “An early start – I don’t if there were 30 people. I’ve never experienced anything like today, and I’ve been a part of some (NBA) D-League games that, you know, wow. That was not an easy environment. I promise you that.”

Vanderbilt’s game with Texas A&M on Wednesday night was called off due to covid-19 issues, and the Commodores were still without three players, including second-leading scorer Dylan Disu.

Former NBA player and current Commdores head coach Jerry Stackhouse was disappointed in how his team started the game.

“(Arkansas) won its last game, but they haven’t been a confident team over the last three or four games,” Stackhouse said. “Then we gave them confidence to know they could come in here, make shots and pretty much get what they wanted.”

Stackouse was not happy his team didn’t give itself a chance.

"We're still fighting, still going at it, but at the end of the day, we're just doing dumb stuff over and over and over again,” Stackhouse said. “And I take responsibility for it, but I don't know. I haven't had any teams that I've had before that I continue to tell the same things as much as I've told this team, for them to come out and do the same s---.”

Smith, who has been back three games after an ankle injury forced him to miss four games, feels like Arkansas is poised for a successful run.

“It feels good,” Smith said. “Once you can start getting a couple in a row, it gets kind of hard to stop. Hopefully we can use this momentum to keep going and take it game by game, and not really worry about the game that is coming after it. Just focus on that game and just keep doing what we're doing, because it's working right now.”

Musselman, whose team played five of its first eight league games on on road, is of the same belief that his team has its confidence back headed into a home game Wednesday against Ole Miss (8-6, 3-4 SEC).

“Yeah, I think right now they are,” Musselman said. “But every game takes on a new theme, a new identity. We have to get ready for our game on Wednesday. We’ve had a lot of road games thus far.

“I thought that our last game at home, not to get off the subject at all, but I thought our last home crowd - out of all the places we’ve been and our home games - I thought the last game, the game against Auburn, that our crowd gave us a lift.

“Not many people can say that in a covid season. I thought Bud Walton got loud. I think our players fed off of that, and we look forward to getting back and playing in front of our fans on Wednesday.”