Razorback gymnasts score big, but fall to No. 1 Florida 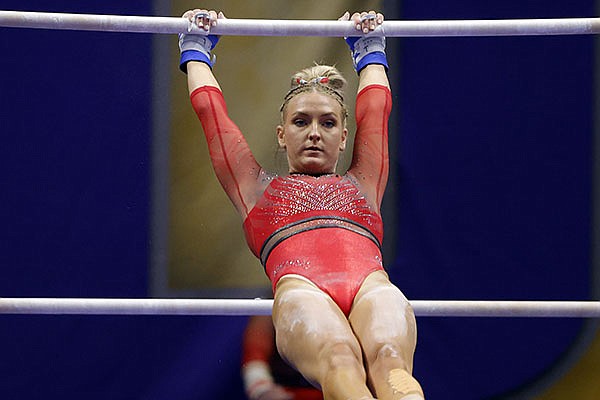 FAYETTEVILLE — The Arkansas Razorbacks gymnastics team soared past a big milestone on Friday, eclipsing the 197 mark for the first time under second-year Coach Jordyn Wieber.

The No. 8 University of Arkansas notched a hefty 197.25, the third-highest score in program history, but it was not enough to surpass mighty No. 1 Florida, which won the SEC dual meet with a 197.425 before a crowd capped at 1,200 at Barnhill Arena.

“I felt like we really built momentum from one event to the next,” Wieber said. “I was really impressed with the way the team handled lineup changes, and we were trying to make some smart decisions to protect a few athletes throughout the meet.

“That says a lot about our team to go above 197 and still be able to look at multiple areas I know we can get better. It’s a really exciting time.”

The Razorbacks were within a sliver heading into the final rotation, trailing by just 0.125 points. But the Gators got busy on the balance beam, posting a 49.425 for the highest event score of the night to hold off the Razorbacks.

“I wasn’t really focusing on where we were in comparison to Florida,” Wieber said. “I just really want our team to go out and do the best that they can do. It’s more about maximizing our scores than defeating the other team, though winning is fun.”

Wieber held all-arounder Sarah Shaffer out of the floor exercise because of cramping issues in her calves after competing on the first three events.

Florida’s Megan Skaggs captured the all-around with a 39.5, followed by teammate Trinity Thomas (39.325), who got a favorable 9.6 score on the beam despite having to put her hands on the apparatus to avoid a fall after a loss of balance. Arkansas junior Kennedy Hambrick was third in the all-around at 39.25, and Florida’s Payton Richards was fourth (39.225).

The Razorbacks had one event champion, as sophomore Bailey Lovett nailed her floor exercise performance to tie Florida freshman Nya Reed at 9.925.

Florida seized a small lead of 0.25 after the first rotation, as the Gators posted a 49.4 on the uneven bars, headlined by Thomas’ 9.975. The Gators counted nothing lower than a 9.85 on the event.

Meanwhile, the Razorbacks were scoring 49.15 on the vault, with no scores lower than 9.8. Junior Amanda Elswick, in her first meet back from a sprained ankle that kept her out last week, scored 9.875 to lead the team in her only event of the night.

Florida’s Savannah Schoenherr planted her vault dismount and scored an event-winning 9.95 in the second rotation to pace the Gators’ 49.375. She was supported by Thomas’ 9.875 and a trio of 9.85s from Ellie Lazzari, Skaggs and Reed as the Gators maintained their lead.

Arkansas also scored 49.375 on the second rotation. Maggie O’Hara, who won the bars in the Razorbacks’ first two meets, posted a 9.9 along with Hambrick to tie for second on the apparatus.

Shaffer posted a 9.875 on the event, while Lovett and Kiara Gianfagna followed with 9.85s.

The Razorbacks tightened the team scores by pulling within .125 with a solid 49.35 performance on the balance beam, led by O’Hara’s career-high tying 9.925 and 9.9s posted by Hambrick and Lovett. Sophia Carter chipped in a 9.825, while Shaffer and Gianfagna tied with 9.8s.