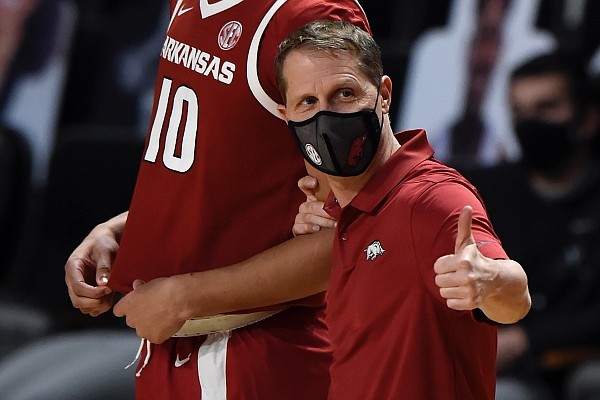 The University of Arkansas Razorbacks made it seem like they were home and practice on that floor every day, as they were more comfortable, aggressive and unselfish than the Commodores and won easily 92-71 on Saturday.

It was probably the best team effort of the season, and it allowed the Razorbacks to get their first consecutive wins since SEC play started.

Of course, there were outstanding individual performances, but nine players saw action and eight scored. The reason Jaylin Williams didn’t was because he didn’t attempt a shot.

Every player had at least one assist and one rebound.

Arkansas had 22 assists on 36 field goals, and that’s a proving to be a winning statistic for the Hogs.

Point guard Jalen Tate couldn’t have been more comfortable playing in his driveway. He scored 25 points, had 8 assists and 5 rebounds.

Moses Moody continued to impress the SEC Network announcers and the nation as the freshman from Little Rock scored 26 points, grabbed a game high 8 rebounds and added 5 assists.

Saying head coach Eric Musselman was pleased would be like saying he likes his diet soda during games regardless of who sponsors the teams.

Musselman has stated he wants around 200 passes a game, and it would be a shock if the Razorbacks didn’t have more than that against the ‘Dores.

The last time these two teams met was what turned out to be the last college basketball game of last season.

They squared off in the first round of the SEC Tournament, and the Hogs won. They would have faced South Carolina the next day.

The Gamecocks had lost one of their best players the day before in practice.

It was believed the Razorbacks would have firmly been on the NCAA Tournament bubble if they won that game.

Only the next morning the nation was served notice of how serious covid-19 was.

All the conference tournaments were canceled and then so was the NCAA Tournament. All spring sports and the professional leagues went on hold.

Now, 10 months later, Vandy had at least two players out of Saturday’s game because they tested positive for the virus on Thursday.

There is talk of college basketball taking a break or conference tournaments being canceled.

All of that is to insure that the NCAA Tournament will be played, and the organization won’t miss out on its biggest paycheck of the season.

On a side note that has been mentioned here before, the last team to win the last game of the season is generally the national champion, and last year that team was the Razorbacks.

For now, Musselman is continuing to weave a united team together to be part of March Madness.

One that understands the need to play defense and share the ball on offense.

While yesterday’s game was almost exactly what he is looking for, there are still instances where a guy shoots first instead of passing.

It didn’t happen often against Vandy, and it didn’t hurt the Hogs against the ‘Dores, who are 0-5 in SEC play.

The Razorbacks scored first and often, and they never trailed.

They made smart decisions and took good shots, hitting 36 of 63 for 57.1% and only one player missed more shots than he made.

Game by game, week by week, the Razorbacks as a whole seem to be maturing and growing into their roles.

Going into Memorial Coliseum, where so many teams have struggled with the shooting depth, getting a 21-point win was big.

Building off the game when Ole Miss visits Bud Walton on Wednesday night would be even bigger.