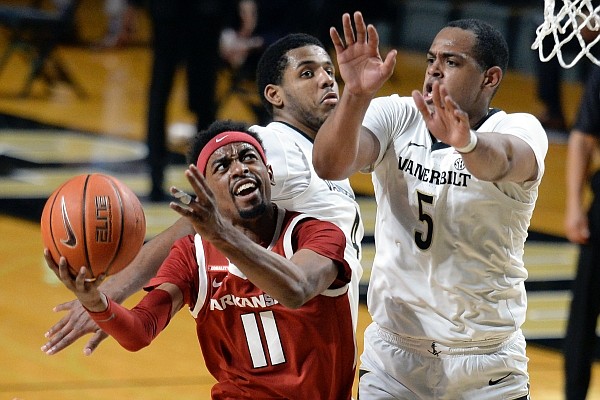 University of Arkansas guard Jalen Tate had perhaps the best performance of his 12-game tenure on the Hill during the Razorbacks’ 92-71 rout of Vanderbilt in Nashville, Tenn., on Saturday.

Tate scored a season-high 25 points on 9-of-15 shooting, but he also stuffed the stat sheet with 8 assists, 5 rebounds and 4 steals and a strong defensive effort in 37 minutes. Tate also led the Razorbacks in plus-minus rating as Arkansas outscored the Commodores by 22 points when he was on the floor.

“I think he had six assists in the first half,” said Arkansas guard Moses Moody, who scored a game-high 26 points. “So he’s a ball distributor. He gets everyone else involved.

“Then, when he’s in the lane they know he’s trying to get other people the ball, so it’s easier for him to get buckets. It’s a big help when he does.”

Arkansas forward Justin Smith said Tate’s mid-range and perimeter jumpers, in a 3-of-5 performance from three-point range, gave the Razorbacks a lift.

“When he’s aggressive, he’s a willing passer and he had eight assists, so with that, he’s very dynamic and it makes a lot of the rest of our jobs a lot easier, Smith said. “As long as he can keep going, it’s going to really help us, for sure.”

The 6-6 Tate’s defensive responsibility was 6-3 Scotty Pippen Jr., who entered the game ranked second in SEC scoring (21.2 ppg) and assists (5.3). Pippen finished with 15 points on 6-of-14 shooting, including 0 of 2 from three-point range, and 5 assists.

“Tate was assigned to him the entire game,” Coach Eric Musselman said. “So not only did Jalen really score the ball and have a ton of assists — eight assists — four steals, then add in the fact that he held the second-leading scorer in the league to under 50% and to only score 15 points and to probably have what I’m going to assume was close to a season low in free throws attempted.”

Pippen, an 82.9% free-throw shooter who averaged seven attempts per game, went 3 for 4 from the line.

Vanderbilt Coach Jerry Stackhouse was clearly annoyed at some of the issues that hurt his team in the 21-point loss, the Commodores’ worst of what has been a trying season.

“I think at this point it’s executing what you know how to do,” Stackhouse said. “I’m saying the same thing that we say after pretty much all these games. Same results.

“We’re making mistakes on things that we understand how to do. We’ve got to have the will to do it and take some pride.

“Those guys were just lining us up. That was just a — straight up like a game at the park, where it’s like, ‘OK, I’m going to take my man.’ There wasn’t a whole lot of scheme. They’d just break our man down, and were just open in the slot.

“We’ve got to find some guys that want to play.”

Vanderbilt (4-7, 0-5 SEC) has had a rough go of it trying to find a rhythm. The Commodores had four games canceled to open the season due to covid-19 issues and have had to postpone three SEC games.

The Razorbacks scored an early second half basket on the break that was a sight to behold. The play started when Scotty Pippen Jr.’s lob pass for Maxwell Evans was too high and caromed off the edge of the backboard toward the corner.

Arkansas guard JD Notae chased down the loose ball ahead of Pippen and turned up the floor. Five seconds later, Justin Smith was dunking on the other end. Notae took three dribbles to near mid-court, threw a long pass to Jalen Tate just past the free-throw line on the right elbow, and Tate launched a perfect lob to the left side of the rim where Justin Smith grabbed it and flushed to give Arkansas a 55-41 lead, its biggest to that point.

The listed attendance of 83 at Memorial Gymnasium was believed to be the smallest crowd the Razorbacks have played in front of in recorded history. Vanderbilt is allowing only staff and family members of staff and players to attend games due to the coronavirus pandemic.

“I’ve never, ever experienced anything like today, and I’ve been a part of some D-League games that — Wow — it was not easy,” Arkansas Coach Eric Musselman said.

Prior to Saturday, the lowest crowd count for an Arkansas game had been 110 on Christmas Day 1997, in a 94-83 loss to Murray State at the Puerto Rico Classic in San Juan.

Arkansas forward Justin Smith said he has improved game by game since returning from ankle surgery on Jan. 16, 17 days after he suffered the injury in a 97-85 win at Auburn.

“Our athletic training staff is doing a great job with me. We’re just going to take it day-by-day and just see how it goes.”

The Razorbacks had five assists on their first six made baskets, racked up 14 assists by halftime and finished with 22 on 36 made baskets. It was their fourth-highest total of the season and second-most in an SEC game behind the 24 on 36 field goals in the 99-69 rout of Georgia on Jan. 9.

Jalen Tate led the way with eight assists, his third-highest total of the season behind 11 against Central Arkansas and 10 against Georgia. Also chipping in on the dish count: Desi Sills with 4, the trio of Moses Moody, JD Notae and Justin Smith with 2, and Davonte Davis, Vance Jackson, Connor Vanover and Jaylin Williams with 1 apiece.

The Razorbacks got off to a hot start by scoring on their first four possessions and opening up a 9-0 lead that was 12-8 at the first media timeout at 14:22.

Arkansas guard Desi Sills was hit with a delayed flagrant foul after a scramble for a loose ball, giving the Commodores a free point midway through the first half. Sills and Vandy’s Ejike Obinna were both on the floor in Arkansas’ lane when the ball squirted away and toward the Vandy front court.

Obinna got up first, and Sills snagged him by the leg, pulling him back to the floor. Play continued from there, but referee Anthony Jordan notified the teams that a replay review spotted the flagrant foul during a timeout at the 11:44 mark. Obinna hit the lone free throw connected to the infraction to draw the Commodores within 18-13, and Sills sat for the rest of the half with two fouls.

No Disu for Vandy

The Commodores played without 6-9 forward Dylan Disu, one of the SEC’s top front court players, who is averaging 13.3 points, 8.4 rebounds and 1 block in 30 minutes per game. Disu was out due to covid-19 contact tracing.

In fact, Vanderbilt had a very short bench, most likely due to the virus issues that caused a postponement of their mid-week game against Texas A&M.

In addition to Disu, the Commodores played without Quentin Millora-Brown, Drew Weikert, Akeem Odusipe and Braelee Albert, as well as Tyrin Lawrence, who is out for the year with an injury.

The Commodores missed out on two consecutive chances to convert old-fashioned three-point plays in the first half.

Maxwell Evans drove by Davonte Davis and made an off-balance bank shot while being bumped by Davis, but he missed the free throw at the 6:30 mark.

After Jalen Tate and Justin Smith both missed from in tight on the other end, Clevon Brown got his chance. Brown powered in for a layup on a dish from Scotty Pippen Jr., and was fouled by Smith on the play. Brown also missed his free throw at the 5:59 mark to leave Vandy trailing 31-27.

In the second half, Vandy’s Myles Stute also missed his free throw on an and-one chance after a Davis foul. DJ Harvey finally broke the skid of missed and-ones by completing a three-point play at the 8:19 mark to cut Arkansas’ lead to 75-60.

Arkansas opened 3 of 7 from the free-throw line and was shooting better from three-point range (4 of 8 for 50%) at that time.

Things got better, but only by a little bit.

The Razorbacks won their seventh consecutive game over Vanderbilt and now own a 29-12 series lead, with all but two of the games coming since Arkansas joined the SEC for the 1991-92 season. The Razorbacks have won 11 of the last 12 games in the series.

The Razorbacks also pulled even with the Commodores at 8-8 at Memorial Gymnasium after winning its fourth in a row at the venue.