Jalen Tate undervalued as a scorer 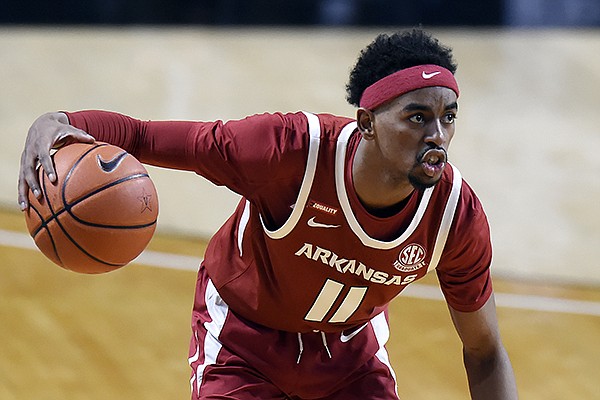 FAYETTEVILLE — Arkansas coach Eric Musselman has described graduate transfer guard Jalen Tate as a Jack of all trades at various points during the 2020-21 season.

During the Razorbacks’ 21-point road win against Vanderbilt on Saturday, the lanky Tate was at the top of his game on both ends, dropping 25 points to go with 8 assists and 4 steals in 37 minutes.

He starred offensively and reverted back to his playmaking ways after a two-game stretch vs. LSU and Alabama in which he totaled four assists and 10 turnovers.

In getting Arkansas back to .500 in SEC play at 4-4, Tate had 10 potential assists at Vanderbilt, and the Razorbacks converted eight. His scoring, though, was the bigger story.

His play led Musselman to say the 6-6 guard, who is known more as a defensive stopper and facilitator, is an underrated scorer. Against the Commodores, the Razorbacks utilized his size advantage to create opportunities on the offensive end.

“When he gets into the teeth of the defense, he’s got a good floater, and he’s got a good midrange game, much like Jimmy Whitt did,” Musselman said Monday while previewing Wednesday’s home game against Ole Miss. “They kind of get them in different ways. Tate has the ability maybe to use the dribble a little bit more into his midrange shots and start off at a pick-and-roll set and kind of get his way into his midrange game.

“But he’s also a reliable 3-point shooter, as well. I think that opens up some of the stuff for he and his teammates.”

Perhaps some of Tate’s methods can appear unorthodox — contorting his body around the rim and his footwork — but he has been one of the Razorbacks’ most effective scorers inside the 3-point line. For the season, he is 57 of 95 (60%) on 2-point field goal attempts, and he has hit 32 of 50 (64%) such shots in conference play.

His true shooting percentage — an approximation of what 2-point percentage a player would need to have to score the points he produces on all of his shot attempts — is 62.9 against conference competition. That mark is fourth best in the league behind Alabama’s John Petty, Missouri's Jeremiah Tilmon and Dylan Disu of Vanderbilt.

“He’s a willing passer and he had eight assists, so with that he’s very dynamic and it makes a lot of the rest of our jobs a lot easier,” Smith added. “As long as he can keep going, it’s going to really help us, for sure.”

In four seasons at Northern Kentucky, Tate was not much of a threat from the perimeter. His best stretch beyond the arc came during the 2018-19 season when he connected on 22 of 56 attempts. Then he made only eight 3-pointers the following season.

The five made 3-pointers last week were his most over a two-game span since his March of his sophomore year at NKU. He hit 4 of 6 3-point attempts on the right side of the floor against the Tigers and Commodores, and 3 of 5 in the corners.

In conference play, he is 4 of 7 in the corners.

“I think when he's knocking down open shots when people help on other players, it's really important,” Musselman said. “We've seen it behind closed doors just his ability to continue to get better both from a confidence standpoint and just from a repetition standpoint in practice he's getting better.”

Musselman credited Tate for his work defensively during the team’s two-game winning streak. Tate recorded four steals and one block in both games.

Arkansas allowed .92 points per possession with Tate in the lineup, according to HoopLens. That figure jumped to 1.13 in his 23 possessions off the floor.

“Drawing the toughest defensive assignment every night makes him really valuable,” Musselman added. “He’s a high deflection player from the defensive end and he’s a guy that is always trying (to figure out), ‘How can I get my teammates involved,’ as well.”