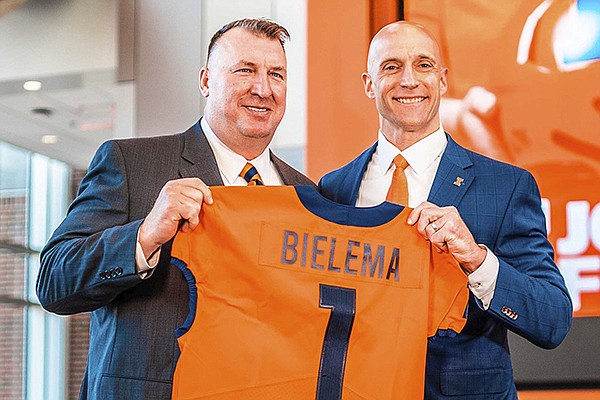 Incoming Illinois football coach Bret Bielema, left, is accompanied by Josh Whitman, Director of Athletics at Smith Football Center in Champaign, Ill., as he is introduced as the new football coach at U of I in this undated photo. (Michael Glasgow/University of Illinois Athletics via AP)

FAYETTEVILLE — Former University of Arkansas Coach Bret Bielema’s hiring as head coach at the University of Illinois last month has led to a change in his lawsuit against the Razorback Foundation in their ongoing legal battle.

On Monday, Bielema’s legal team voluntarily dismissed two counts in his lawsuit against the foundation.

Bielema’s amended suit, filed last July, included causes of action for breach of the non-disparagement clause in Bielema’s final buyout agreement and for false light invasion of privacy. Both of those counts have now been dropped, as stipulated by attorneys on both sides.

Bielema was hired last Dec. 19 at Illinois, and on Jan. 19 the Illinois Board of Trustees approved his 6-year contract, which starts at a $4.2 million salary with increases of $100,000 per year.

“In light of this development, Bielema wishes to dismiss Counts II and III of his Amended Complaint,” read the dismissal document filed on Monday.

This is the latest among recent filings in the case.

Last week, Federal Judge P.K. Holmes III granted a motion that will allow the Razorback Foundation to file an amended counterclaim under seal.

Bielema and Neil Cornrich, his agent and fellow counter-defendant, opposed the motion, arguing there had not been adequate time for a “meet and confer” to “resolve disputes about whether information has been properly designated as confidential under the Court’s protective order.”

Attorneys representing Bielema, including Thomas Mars of Rogers, filed their original lawsuit last June, arguing the foundation broke the terms of its buyout agreement with Bielema. The lawsuit demanded $7.025 million in compensatory damages, as well as punitive damages and a jury trial, which has been scheduled to begin in June.

The Razorback Foundation subsequently filed its counterclaim, demanding more than $4.2 million in buyout money that had been paid to Bielema as of Jan. 31, 2019.