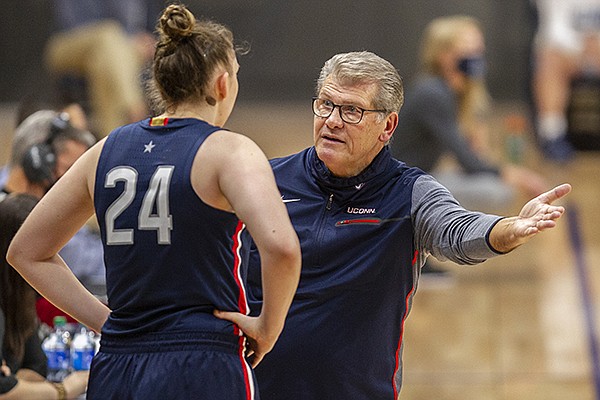 FAYETTEVILLE — Arkansas women's basketball coach Mike Neighbors hopes when the Razorbacks take the floor Thursday against Geno Auriemma and the No. 3 UConn Huskies that the outcome is better than when the two coaches meet on the links.

"We've had the opportunity to play some golf together," Neighbors said Wednesday. "I can't beat him on the golf course."

The Razorbacks (11-6) have lost four of their last five games, and things won't get any easier against UConn.

"I would be lying to you if I said that all of our confidence isn't shaken in some shape, form or fashion," Neighbors said. "And we certainly need maybe a ball to bounce our way to get a little bit of that going, but we're not defeated. There is no discouragement. I do think we've developed a calloused toughness about us."

Arkansas is 1-6 against teams ranked in the Associated Press Top 25 this season, but Neighbors said his team has learned lessons from those losses.

"I do think, through the pain of losing, they've learned the value of every single possession," he added.

While the Razorbacks are reeling in a sense, Auriemma doesn't believe the Huskies can just walk into Bud Walton Arena and get a win.

"I don't think if we go to Arkansas and we let them score their average that we're going to be able to win the game," Auriemma said. "We still have to defend them somehow, and defend them well, and then we have to make a lot of shots.

"I think the two keys are for sure we have to keep them off the free throw line, and we have to limit how many opportunities they get from the 3-point line, which is easier said than done."

Auriemma also pointed out that the Huskies can't simply run with the Razorbacks, who average scoring 85.4 points per game. That mark ranks first in the SEC and is tied for sixth in the country.

"For us to just go in there and think that we can outscore anybody anytime is probably not good," he said. "That's not who we are."

Neighbors was not buying what Auriemma was selling.

"They're very very capable of playing at a number of different paces. I think he's giving us respect and we appreciate it, but I ain't falling for it."

Thursday's game will be the first time the two coaches have faced each other on the court, but their paths have crossed a few times throughout their careers.

"I got lucky early in my career when I worked for Kathy Miller at Tulsa," Neighbors said. "(Auriemma) had recruited her when she was a player at Virginia when he was an assistant coach back there. I got a chance to meet him early on and hang out with him on the road and learn from him."

One of the things that Neighbors learned from Auriemma was how to keep a program at the top – something he hasn't had to implement quite yet.

"He's someone on the road I'll talk to about how he's sustained some things," Neighbors said. "I haven't been in that situation yet. I've been places where we've been building, not necessarily sustaining and growing and doing what he does. And I think that's the hardest thing to do in all of sports. When you look around, getting to the top a lot of times is easier than staying at the top.

While Neighbors hasn't had to sustain success yet, with his longest stop as a head coach being four years at Washington and currently at Arkansas, his hard work has caught Auriemma's attention.

"Mike's been around the block a little bit, and everywhere he's been, even as an assistant or head coach, he's done a great job," he said. "Taking Washington to the Final Four and then going from Washington to Arkansas and getting it there so quickly, he has a way. You know he works extremely hard at recruiting. He's really smart as a basketball coach.

"He has a style of play that really works, and he's at a place that gives him what he needs in an area of the country that there is a lot of really good players growing up. I'm not surprised. I'm happy for him. He's one of the really good guys that works his butt off."

While they will be opponents Thursday, Neighbors values how much Auriemma has meant to women's college basketball.

"He's been somebody for me, like, early in my career, people were like, 'Why aren't you coaching men's basketball? Have you ever thought about coaching men?' They say that to Geno all the time. 'He might take the UConn men's job.' No, he's not," Neighbors said. "We like coaching women's basketball. He's been that person that I look at all the time. He could've coached an NBA team, he could've coached a number of men's college teams.

"He likes women's basketball, and he wants to promote that game. That's what I've always looked to him for."