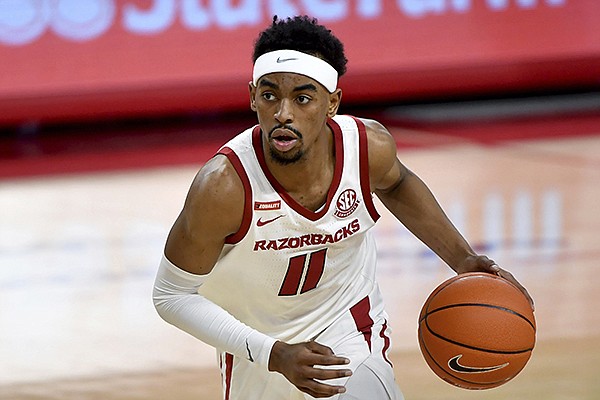 FAYETTEVILLE — If things had worked out differently, Jalen Tate and Romello White might be playing for the same team this season.

Or Tate might be playing for Ole Miss tonight in Walton Arena and White for Arkansas, instead of Tate being a Razorback and White a Rebel.

Arkansas vs. Ole Miss: How to watch and listen, betting line, team comparisons

When White, a 6-8 center who started at Arizona State the previous three seasons, entered the transfer portal, Arkansas was among the teams that contacted him.

Like White, Tate has started every game for his new team.

Tate, a 6-6 point guard who started at Northern Kentucky for three years and last season was the Horizon League defensive player of the year and MVP of the conference tournament, is averaging 11.5 points, 4.7 assists, 4.0 rebounds.

In Arkansas’ 92-71 victory at Vanderbilt on Saturday, Tate had a season-high 25 points, 8 assists and 5 rebounds. He also had the defensive assignment against Commodores guard Scotty Pippen Jr. and held him to 15 points — more than six under his average.

“We assign Jalen to the best perimeter player,” Musselman said. “And for the most part he’s held those guys under their averages every night without giving extra help.”

“We’ve got to do a good job of trying to find Romello when he’s open, because he needs to score in these kinds of games,” Davis said. “Sometimes we’re late getting it to him.”

ESPN rated White the No. 4 graduate transfer after he averaged 10.2 points and 8.8 rebounds last season.

White, who is from Atlanta, transferred to get closer to home. Ole Miss was a natural landing spot because Rebels assistant coach Levi Watkins had been an assistant at Arizona State, where he recruited White.

“Talking to Pac-12 coaches, they [were impressed by] his scoring around the rim, his offensive rebounding, his ability to block shots,” Musselman said. “He’s a really, really, really good player with a lot of experience coming from another Power 5 conference.”

The Rebels’ other high impact transfer is 6-1 junior guard Jarkel Joiner, an Oxford, Miss., native who is averaging 10.9 points. He redshirted last season after transferring from California State-Bakersfield, where in 2018-19 he averaged 18.6 points to lead the Western Athletic Conference.

Tonight won’t be Joiner’s first game in Walton Arena. As a freshman, he scored 12 points for CSUB when the Razorbacks beat the Roadrunners 95-68 on Dec. 27, 2017.

Joiner scored 21 points in the Rebels’ 61-50 victory over Texas A&M last Saturday and is averaging 13.4 in SEC games.

“Joiner could really score at Bakersfield,” Musselman said. “I think he’s improved. He’s got a pull-up game where he can stop on a dime off the dribble and make shots.”

Smith, a 6-7 graduate transfer from Indiana, has started all 10 games when he’s been healthy.

“Justin is one of the best offensive rebounders in the country,” Musselman said. “The offense flows when he’s on the floor. He makes us much better defensively because we can just assign him to an up front player. We don’t have to worry about over-helping when he’s guarding a guy.”

Notae, who redshirted after transferring from Jacksonville (Fla.) University, has been the sixth man.

“JD’s our one guy that can get a shot at any time,” Musselman said. “It might not be a good shot, but he has the ability to get a shot off late [in the] shot clock.

“He’s got to continue to learn when he’s at that point guard position to involve his teammates more. He’s got to understand what a good shot is compared to a great shot. But it’s part of the development that we thought was going to happen coming from Jacksonville being such a high-usage and high-volume player from a lower conference.”

The 7-3 Vanover redshirted after transferring from California.

“Connor’s done a great job,” Musselman said. “I feel a little bit bad for him because he had such a great summer and then he had a setback [becoming ill] losing weight trying to get back healthy. He needs to continue at his size to go down on the block and create an advantage at 7-3 with some back to the basket stuff.”

Jackson, a 6-9 graduate transfer from New Mexico, has hit 19 of 52 three-point attempts.

“Vance is a guy who stretches the floor out for us,” Musselman said. “He’s a guy at 6-9 that adds a different dimension to us. Not just being a shooter, but he gives us more length on the floor as well.”

Davis has been impressed by Arkansas’ transfers.

“I love Tate,” Davis said. “I think Tate’s one of the most competitive guys that I’ve watched on film.

No doubt White would have been a nice pickup for the Razorbacks as well.

“I’m glad he didn’t give them any attention,” Davis said. “They’ve got good enough transfers anyway.”