Safety first on the river 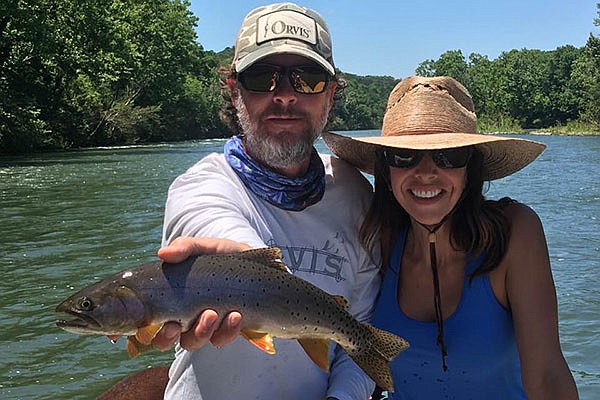 There is a growing misconception that I’m a fly fishing guide. As a good friend reminds of a line once typed in this space, I’m just a mediocre fly fisher.

Anything other than that is over stating, or a complete fabrication. Now and then, I’m asked by friends to help someone get started in fly fishing, but I’m NOT a guide.

I know several elite fly fishing guides. There is no comparison to what they do and my ability to teach casting or anything else related to fly fishing. I know a good fly fisher when I see one, I just can’t get someone there.

But I am learning about points of emphasis from my son-in-law, one of the best of those elite guides. Norfork’s Kristopher Bouldin teaches me something every time I’m with him on the water.

The learning increases tenfold if I am able to watch him fish. Stealth, technique and patience ooze from his casts.

I once saw Bouldin produce magic on the river with a raw beginner after just 15 minutes of instruction in the parking lot. That day still ranks as my single most incredible day of fishing on the White River.

The preliminary instruction included how to fight a fish. The newbie, Sen. John Boozman of Arkansas, held a fly rod with Bouldin pulling line from the tip. The guide ran around the parking lot with the end of the fly line. The coaching was the equivalent to playing lots of big fish.

By lunch, Boozman had caught dozens of 20-inch trout on a dry fly. It was incredible hopper bite on the White River. I still have proof. There is a long since retired point-and-shoot camera on my desk with a memory card that I can’t bear to delete.

It was really a sad day in some respects. My friend had no idea that it was a trip of a lifetime. I knew what Bouldin had done, but it probably ruined expectations for a new fly fisher. He had already experienced the ultimate.

As I returned my friend to Fayetteville from the White River, I asked, “What new discipline are you going to conquer tomorrow?”

I’ve been in awe of Bouldin ever since, but never have I listened more intently as during a three-hour drive to Little Rock last summer. I subbed for my daughter when he went for emergency surgery for a detached retina.

Our discussion heightened my awareness for safety on the river, most notably for the eyes. A flying hook is a guide’s worst nightmare.

Oh, there are other bad things that can happen in fast, cold water on our tailwater fisheries.

It can get dicey in a hurry while wading if the generators are turned on without warning. There are forecasts for the release schedule online, but it sometimes changes.

Or, it could be dangerous in a boat if a dropped anchor is lowered accidentally in a raging river or if there is a too fast turn. Both can sink a boat.

For the sake of brevity, let’s make eye ware the point of emphasis in this commentary. I’ve made it my No. 1 priority any time someone asks me to help a new fly fisher.

I’m capable of helping them catch a few fish, but my main emphasis for the day is to teach that polarized sun glasses will do more than help them see the fish. Indeed, they will reduce the glare on a bright day and make it a more enjoyable experience to see beneath the surface.

No longer do I fret when a first time fly fisher joins me on the river wearing bright colors. There is a chapter in one of my favorite “how to fly fish” books that focuses on wearing drab colors to blend into the backdrop on the river. The first sentence of the chapter: Friends don’t let friends wear neon in the river.

No, that’s not the preaching point anymore. Friends don’t let friends fly fish without sunglasses. Never mind that you can see fish better, remember that you just want to see at the end of the day on the river. 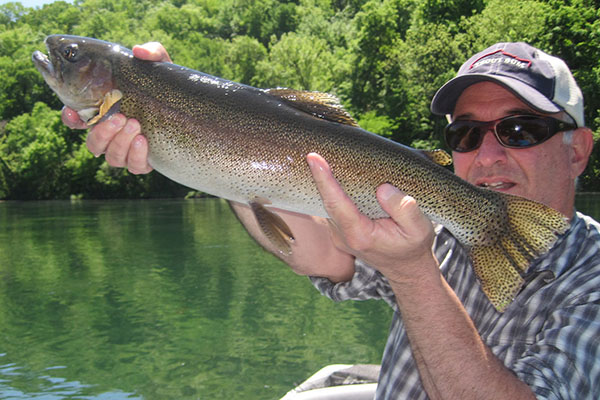 Wrap-around sunglasses like these bifocals worn by Clay Henry are handy on the river — and good for eye protection. This 20-inch rainbow was caught on the White River below Cotter.

“But I tell people in my boat, wear them all the time and make sure they cover all of the eye. If it's dark and overcast and they want to wear clear safety glasses, that's fine, too.”

In other words, those popular aviator sunglasses with lots of open space on the outside are not the best option.

It took watching Bouldin recover from a partially detached retina to realize the importance of eye safety. I should have known it long ago when I saw a friend stick a hook in his own cheek when a hook came loose from a fighting trout just short of the net. That fly came flying straight to the fly fisher’s face.

I’ve stood by someone on the river teaching the cast and had a hook bounce off my hat, typically from behind.

You can sometimes duck when you see the fly coming at your face. It doesn’t take much force to mess up an eye.

Bouldin’s client bounced a fly off his eye when he took off his sunglasses for only an instant. He was switching to his readers to tie on a new fly. He’s got prescription bifocal sunglasses now.

“I told (a second client) to stop casting for a second while I put on my readers,” Bouldin said. “It only takes an instant and only one cast for something bad like that to happen. He made one more cast.

“I guess it’s kind of like a hole-in-one, there is a lot of (bad) luck involved.”

It’s helped Bouldin be more vocal among his peers and “bark a little firmer” to clients.

“I’ve gotten a lot of guides to take eye safety to heart after what happened to me,” he said, noting he was off work for almost two months while his eye healed.

“I think we’ve gotten the attention of a lot of people. I mention what happened to me to my clients.”

Guides — and fly fishers — are still going to get hit with flies. It probably happens about once a trip. Even a good caster makes a mistake, especially with tired arms and hands.

A guide rowing a boat down the river is in a dangerous position. He probably can’t dodge two airborne flies at the same time.

But this message is just as much for the solo fly fisher. A windy day makes him more at risk from his own flies.

Not long ago a retired emergency room doctor ended up at my table after a round of golf. Can you imagine what comes through the ER in a river town? I asked if there was anything unusual.

“I’ve seen lures and flies buried all over faces, heads and hands,” he said. “The worst was a guy who was trying to get a treble hook out of a fishing buddy’s head. There was one barbed treble hook in a head, another from the same lure in the other guy’s thumb.

“Neither guy was in bad shape, but pretty miserable by the time they got to me.”

It was a reminder of why my flies are single barbless hooks — and sunglasses are required.