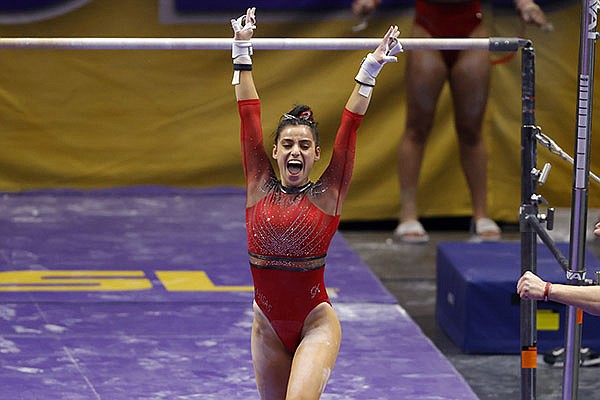 FAYETTEVILLE — The University of Arkansas gymnastics team could not have competed against a more difficult schedule out of the gate.

All three of the Razorbacks’ meets have come against top two opponents, with a home-and-away series against No. 2 LSU and a home meet against No. 1 Florida.

Arkansas is coming off a big 197.25 last week against Florida, which would have beaten every other team in the country except the Gators.

“Scoring a 197 so early in the season is so encouraging,” Arkansas junior Sophia Carter said. “It wasn’t even a stellar meet for us. We’re just so excited and encouraged that we are a top program, ranked sixth in the country so far.”

Added sophomore Bailey Lovett, “We’re finally proving we’re the team we think we are and now everyone’s getting to see us. We know we have more in us and know we can do better, so we’re all pumped up and ready to keep climbing and growing and proving to everyone, here we are.”

Second-year Coach Jordyn Wieber said she was impressed with the team’s Sunday and Monday practices after blasting past 197 for the third-highest score in program history.

“We broke that 197 mark and we had a great meet,and sometimes you wonder how a team is going to respond to something like that, whether they’re going to say, ‘You know, what, we hit 197, we’re going to chill this week’ or if they’re going to come back in all fired up and even more motivated to get better,” Wieber said. “And that’s what they did. They came in and I would say Sunday and Monday’s practices were some of the most energized and motivated practices I’ve seen this team have all season.”

Despite the big score and recent success against perennial power, history is against Arkansas tonight. The Razorbacks have won three of the last seven meetings against the Bulldogs, but they have never won at Stegeman Coliseum. Georgia leads the all-time series 36-5-1, including a 9-0 mark in Stegeman.

Arkansas scored a season-high 196.95 while beating the Bulldogs in last year’s dual meet at Barnhill Arena.

Wieber said logging a dual-meet win is definitely on her mind, “especially because we had a really strong win against Georgia last year.

“I’m not lying when I say I really don’t focus on what team it is and who we’re competing against and winning. I don’t believe that serves me and how I lead the team. We’re just going to go out and put the focus on hitting our routines and doing our best job. If it comes out with a win that would be nice, that would be amazing.”

Wieber said three meets against Florida and LSU gave the Razorbacks an early season edge that has helped.

“Competing against the top teams early in the season has pushed us,” she said. “It’s made us better, and it’s also I think increased the confidence level of our team, to know we can come that close to top teams. That’s been a confidence booster, I think, without focusing too much on who those teams are and winning.”

Arkansas scored 49.35 or better on three of four events last week but just 49.15 on the vault, with junior Amanda Elswick hitting the only perfect landing on the apparatus.

“This week a big focus has been on landings, sticking bar dismounts and beam dismounts, and then just controlling the skills on the beam and controlling the floor landings, so that we’re not opening the door to any possible, ‘well, maybe’ deductions,” Lovett said.

Wieber said sophomore Kiara Gianfagna (foot) would be limited to the bars and beam again, while Elswick (ankle) would probably max out at just the vault. Sarah Shaffer, whose calf cramps kept her out of the floor exercise last week, will probably be up on all four events again, Wieber said.