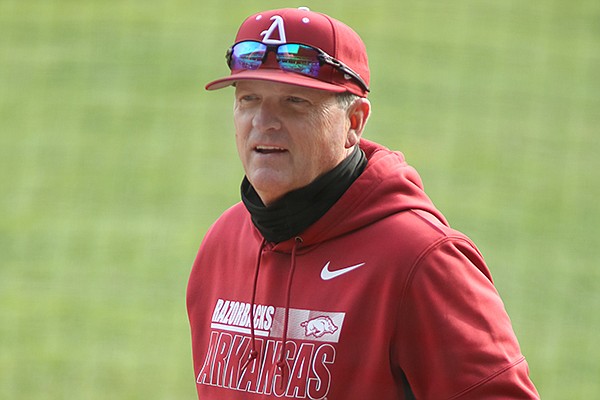 FAYETTEVILLE — Reminders of covid-19’s impact on the upcoming college baseball season were visible all around Baum-Walker Stadium on Friday, the first day of preseason team practice.

Team personnel wore face coverings in the dugouts; pitchers not scheduled to throw sat in chair-back seats around the stadium to distance themselves from those who were playing; and signs posted at entries informed the public that Arkansas’ practices are closed due to the virus this year, a deviation from a longstanding open-door policy.

On the field was a roster full of Razorbacks who a year ago did not expect to be playing college baseball in 2021. Some were shut out of last year’s MLB Draft that was shortened to five rounds.

“We do have a big roster obviously, as do a lot of teams,” Arkansas coach Dave Van Horn said. “When you keep five or six pitchers that you didn’t think were going to be back after their junior year, then you keep another couple of guys on the other end out of high school, all of a sudden you’ve jumped up five, six, seven, eight, nine guys. It’s just the way it is for a year.”

Arkansas’ 46-man preseason roster includes 28 players who are in at least their second season in the program. It’s unclear how many will redshirt during the season, but rosters will be allowed to exceed 35 players, the cap in past seasons.

“Usually you don’t have this many older guys and guys that have been through it for two or three years around still,” said Casey Opitz, a fourth-year junior who is entering his third season as the Razorbacks’ starting catcher. “Especially on a pitching side, when you have guys that come in and they know the culture already and you have a majority of guys knowing the culture, the freshmen just feed off that and they feed off guys helping each other and putting the work in every day.”

The Razorbacks have experience across the board. Arkansas returns starters at five positions in the field, plus Matt Goodheart, a two-year starting designated hitter who is in competition to be the team’s starting first baseman.

Goodheart is 18 months removed from shoulder surgery that kept him from playing in the field last season when the Razorbacks went 11-5 before the season was suspended due to the outbreak of the coronavirus.

“He had major surgery there that tightened that up pretty good,” Van Horn said. “It’s gotten better — better than it was last year at this time, by a lot.”

On the mound the Razorbacks have an array of arms that have experience in the SEC and in the NCAA postseason.

“What I see are usually seven or eight guys that take the majority of innings going in, but we’ve got at least 15 guys that can help,” said Kevin Kopps, a right-handed pitcher who is in his sixth year in the program. Kopps is one of four team captains along with Opitz, center fielder Christian Franklin and pitcher Zebulon Vermillion.

Van Horn said the Razorbacks have as many as eight pitchers who could be starters this season, but noted the lack of a returning dominant starter might cause Arkansas to start the season ranked lower in national polls.

“We’ve got to get our rotation figured out,” Van Horn said. “It may float a little bit as far as two guys are in, and we’re figuring out the third guy. But if our pitchers will buy in to the team and helping the team, and whatever it takes to help the team, we’re going to have a really good year.”

Returning starter Patrick Wicklander, a third-year left hander, struggled in Friday’s scrimmage when he walked 4 batters and struck out 3 in 1-plus inning of work in blustery conditions. Wicklander was facing a lineup that included all of the returning position starters.

Prior to the outing Van Horn said Wicklander has pitched well in bullpens since returning to campus earlier this month. Wicklander had a 6.32 ERA in four starts last season.

“So far in January he’s been outstanding,” Van Horn said. “He’s in great shape. I think he’s a man on a mission. He’s one of the guys we’re looking to really bounce back…and be a starter for us.”

“We’re going to give him every opportunity the next three weeks to prove to us that he could start for us,” Van Horn said. “His stuff’s been really good.”

Franklin’s RBI single in the fourth inning came against Ryan Costeiu and scored third baseman Jacob Nesbit, who led off the inning with a 13-pitch walk against Corey Spain. Nesbit also had a stolen base, one of six stolen bases in seven attempts, unofficially, against freshman catcher Dylan Leach.