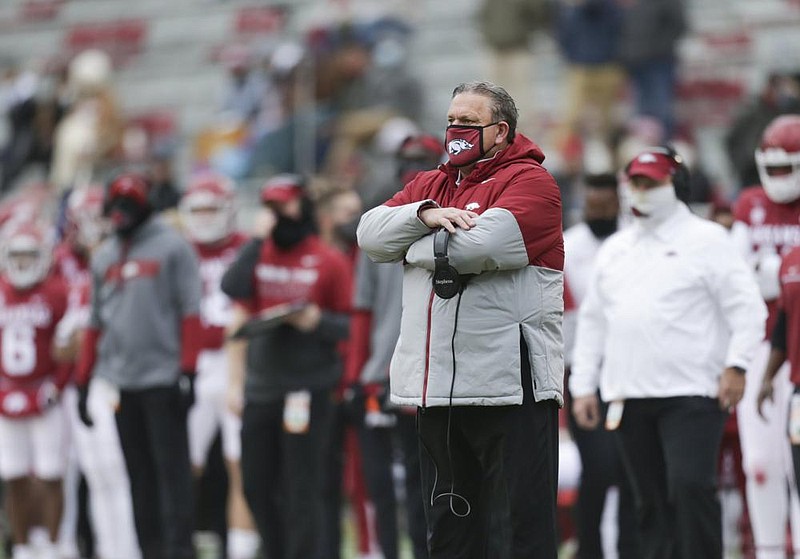 “I was a pretty good tour,” said Thomas, who was joined on the Zoom by his parents. “The love the fan base has for the team is amazing. With the state of Arkansas not having any pro teams they really pour themselves into the Hogs. It’s a fan base like no other.”

Thomas, 6-4, 240 pounds, of Fort Worth (Texas) Nolan Catholic, was born in Pine Bluff and moved to Texas at 3 years old. He has more than 20 scholarship offers from schools such as Arkansas, Oklahoma State, Baylor, Arizona, California and Syracuse.

Coach Sam Pittman stressed how much the Razorbacks want him.

“Told me that he needed me,” Thomas said. “That was a pretty special feeling. Said with my size, speed and length that I would be a player that never comes off the field. You hear position coaches at schools say that, but it feels good to see a head coach show you that type of respect.”

“Great guy. Felt very real and authentic,” Thomas said. “Good to talk to a coach who has been where you are going.”

National recruiting analyst Tom Lemming of CBS Sports Network rates Thomas a three-star prospect. He was impressed with the strength and conditioning presentation.

“Very knowledgeable staff,” Thomas said. “Being developed further is important to me.”

“It went really well,” Pride Sr. said. “Today was the first time his mom was available to see the school.”

She was pleased with the virtual visit.

Pride and his son visited Fayetteville last year on Feb. 1.

A recent report indicated the NCAA dead period might be lifted after April 15. If so, Pride Sr. said they will visit again.

“We talked about that as well. Hopefully they don’t keep pushing it back,” he added.

Several other prospects confirmed virtual visits with the Razorbacks on Saturday. Running backs Rashod Dubinion of Ellenwood (Ga.) Cedar Grove and Jaylon Glover of Lakeland (Fla.) Lake Gibson said they visited with the coaches – as did defensive back Anthony Brown of Milan, Tenn.