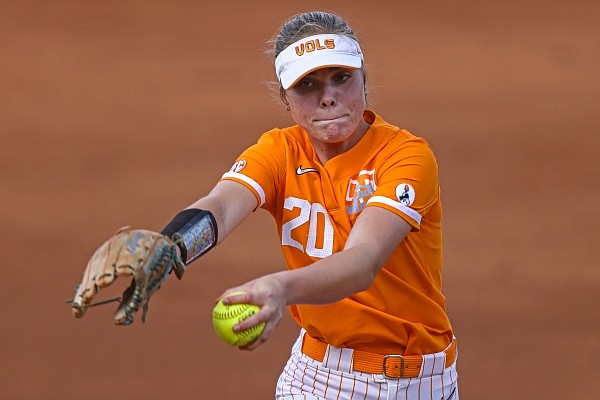 Tennessee's Callie Turner throws to a batter during a game against Kennesaw State on Wednesday, March 24, 2021, in Knoxville, Tenn. (AP Photo/Wade Payne)

FAYETTEVILLE — University of Arkansas softball Coach Courtney Deifel picked up an addition through the transfer portal, adding pitcher Callie Turner to the roster on Thursday.

Turner comes to Fayetteville after pitching two seasons for the Lady Vols and will be immediately eligible for the 2022 season as a redshirt sophomore thanks to the SEC’s new intraconference transfer legislation that was passed in early June. She has three seasons of eligibility remaining.

Deifel said Turner is a player that can help the Razorbacks’ momentum going from their first SEC regular-season championship and second super regional appearance in school history.

“When you look at the portal and try to see what could really help your team, she’s absolutely everything that we wanted to get,” Deifel said. “We’re really excited to work with her. She’s a different look. She’s obviously put up some good numbers, but she rounds out our staff really well and she’s an awesome kid.

“She’s a lefty, first and foremost. Just that alone gives something we haven’t typically relied on. Besides that, she’s just a different velo. She kinda attacks the lower zone a little bit. I just think she’s gonna be such a great addition to our staff.”

Pitching her first full collegiate season in 2021, Turner went 10-3 with a 2.28 ERA in 76 2/3 innings with 5 complete games. She threw a five-inning no-hitter against Lamar and had a string of 18 consecutive scoreless innings. That included 3-3 with a 3.84 ERA in 10 appearances against SEC opponents.

Turner led the Lady Vols in almost every statistical pitching category in the covid-19-shortened 2020 season, going 8-7 with a 2.67 ERA in 91 2/3 innings. She led the league in innings pitched while ranking fifth in wins and sixth in strikeouts.

Mary Haff, the co-SEC pitcher of the year, returns to anchor the Razorbacks staff, which graduated only one pitcher who saw significant innings. Turner will only add to that depth, Deifel said.

“I think we’re gonna have the ability to kinda combo them a little bit,” Deifel said. “And just kinda go with what pitchers might match up with others. I’m just excited to get her on, see what she’s got and how we’re gonna use her.”