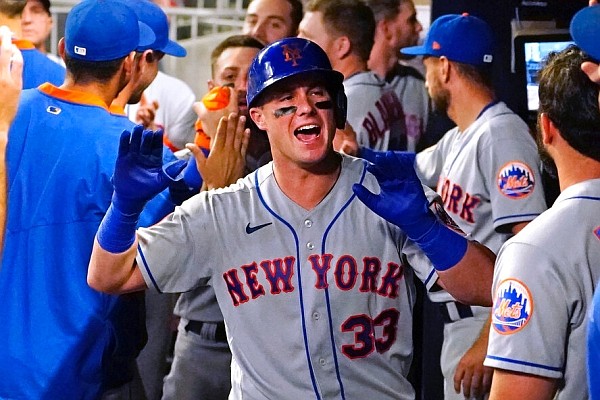 New York Mets' James McCann (33) celebrates in the dugout after hitting a three-run home run during the seventh inning of the team's baseball game against the Atlanta Braves on Tuesday, June 29, 2021 in Atlanta. (AP Photo/John Bazemore)

When the calendar flips to July, the halfway point of the MLB season is not far away. Here is how former Razorbacks are faring as the season approaches the All-Star break:

McCann played hero recently in a game against the Atlanta Braves. With the Mets down 3-0 in the seventh inning, McCann took advantage of a mistake by Braves starter Charlie Morton and hit a home run to left-center field that tied the game.

THIS GAME IS TIED pic.twitter.com/t5siMwB7yx

The home run was his seventh of the year. He hoped the comeback win could spark the Mets in the second half of the season.

"Hopefully the seventh inning today is a rallying point that we can take into the All-Star break and beyond," McCann said in a postgame interview.

The Mets are in first place in the National League East, but are just one game ahead of the red-hot Washington Nationals, who have won eight of their last 10 games.

For the first time since 2013, his second season in the league, Keuchel came out of the bullpen in his last appearance for the White Sox – kind of. When you look at the box score, it will show Keuchel came out of the bullpen in the White Sox's 3-2 loss to the Seattle Mariners on Saturday, but Keuchel started a rain-delayed game that was pushed back Sunday.

The game was halted in the bottom of the third inning Saturday. Keuchel was slated to start Sunday, so the lefty from Tulsa made the "relief" appearance in the first game of a doubleheader. He pitched 5 innings, gave up 6 hits and 2 runs, walked 1 and struck out 4, but gave up two solo home runs.

The game was tied 2-2 when he came out after the eighth inning. Keuchel lowered his ERA over the month of June from 4.25 to 3.96. The White Sox are still four games ahead of the Cleveland Indians in the American League Central, but

Parker has appeared in six games since June 18. He has not gone longer than one inning in any outing this season, and he's faced just one batter in two of those outings.

Parker pitched 4 2/3 innings in his last 6 games and struck out 5 batters. He has given up two earned runs, which has elevated his ERA to 3.86.

Parker was brought up from AAA Columbus on June 5.

Stephan picked up the first win of his MLB career on June 17. Since then he's pitched in three games, finishing two of them.

Both games he finished were Cleveland losses. He pitched one inning in all three appearances and gave up 6 hits, 4 earned runs and 2 home runs. He struck out 2 batters and walked 3 over that span.

Stephan has pitched 29 innings this year and given up 15 earned runs, inflating his ERA to 4.66.

The Braves have won Smyly's last four starts, and he's gotten a decision in three of those games. His ERA has dropped from 5.98 to 4.79, and his WHIP (walks and hits per inning pitched) has moved from 1.411 to 1.315 in his last two starts.

Stanek pitched in four games over the last eight days. He struck out 3, walked 2 and gave up 5 earned runs in that stretch. All five runs came in a 13-3 loss to the Baltimore Orioles on Tuesday.

Anderson is still on the injured list, but Christina De Nicola of MLB.com reported this week that he's participating in defensive drills and taking soft toss.

Anderson is not able to come off the IL until July 27, but could go on a rehab assignment earlier.

"But he says none of that's bothering him anymore."

Matheny went on to say that Benintendi has asked about when he can start doing baseball activities again, but the Royals have yet to announce a rehab plan for the former Razorback.

Beeks had Tommy John surgery in August 2020. He is currently listed on the team's 60-day IL.