KK Robinson turning a loss into a lesson 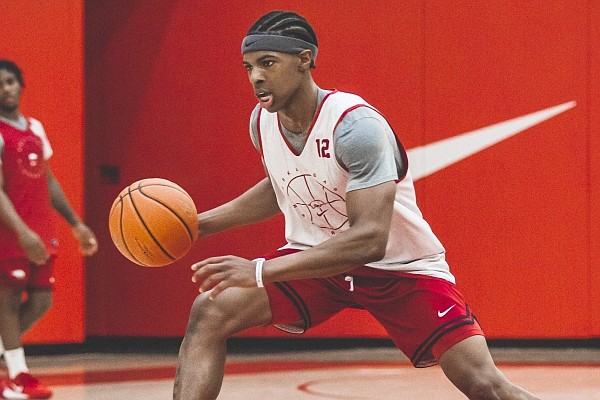 Arkansas guard KK Robinson dribbles during a practice in the Razorbacks' practice facility on June 2, 2021.

The pain he was experiencing was the result of an awkward landing on another player’s foot. Robinson felt his foot twist a bit in that moment, but he continued playing and practicing.

“Afterward, we went to a football game,” Robinson said. “That’s when I was like, ‘Oh, my foot is kind of hurting.'”

By Jan. 6, the pain had become too much, and at halftime of the team’s game at Tennessee he approached Arkansas coach Eric Musselman to inform him of the injury.

Four days later it was announced Robinson would miss the remainder of the season following surgery to repair a bone fracture in the foot. His freshman year was over after 11 games.

Robinson, who averaged 2.6 points in 8.4 minutes per game, saw the writing on the wall even before receiving official word that he needed the operation.

“I kind of already knew. I was playing on it the whole time hurt,” he said. “It was just that last game against Tennessee, I knew I couldn’t go no longer. It hurt me so bad. I waited until I couldn’t go anymore, but once it was time I just had to call it and get ready for next season.

“Once they told me I would have to have surgery, that’s when it really hit me, like, ‘OK, now I’m really out for the rest of the season.’ I couldn’t do what I wanted to because of the pain that I was in.”

A prize in Arkansas’ 2020 recruiting class and a talented guard who entered college with plenty of expectation to contribute immediately, Robinson knew his road to a return to the floor would not be easy, but he did not hang his head. Not being able to play was an eye opener, he said, but Robinson has never been one to let a negative keep him down.

Musselman commended him late in the 2020-21 season for his attitude and engagement during team practices. When in the gym, Robinson often did push-ups and sit-ups on the sideline, and on certain days he would go to the weight room then watch film with a support staffer. Once back in his dorm room, he used a bone stimulator on his foot.

To get himself through that challenging time, he also got into art, watched more basketball, studied the game and worked on his handle and jump shot — a lot.

“I learned that my work ethic is different from most,” Robinson said. “With my foot being hurt, I was still in the gym four times per day trying to get better. I knew that I couldn’t move as good, so I had to be able to knock down shots at a more efficient rate and I had to be able to think the game better.”

Robinson said June 25 was his first day scrimmaging with the Razorbacks. While he was understandably rusty and not in game shape, he did hit the floor with an improved physique.

During Robinson's comeback, Arkansas strength and conditioning coach Dave Richardson posted multiple photos and updates on the guard to his Twitter account. The tweets were often accompanied by #Project190, which represented Robinson’s goal weight prior to returning to action.

Listed at 175 pounds on the Razorbacks’ official roster last season, Robinson came close to reaching the mark he and Richardson set. He topped out at 187 pounds. Robinson said he is now in the 182-183 range.

“I feel great. I haven’t felt like this in so long — since dang-near last summer. I feel great out there,” he said. “I was so excited to finally be out there and able to move without any pain and doing different things. I definitely feel stronger.

“My body is definitely bigger than last year and I can take bumps and finish through contact a little better. Just being able to use that strength now and use my body, I feel like it’ll be an advantage next season.”

Robinson, who wears No. 2 because he is the second oldest of five boys in his family, has a lot to prove to himself next season. He began his freshman year by scoring 15 points against Mississippi Valley State, but he played more than 15 minutes only once over his final 10 games.

Remaining healthy and putting together a productive season as part of a team that enjoys a good deal of success would mean the world to him.

Assessing his play in 2020-21, he felt he was too aggressive, particularly on defense. According to KenPom data, Robinson committed seven fouls per 40 minutes played. Freshman forward Jaylin Williams was second on the team at 4.8.

In preparation for the upcoming season, his offseason focuses are mastering the pick-and-roll game, growing more consistent with his jump shot and making certain he puts teammates in positions to flourish.

“It’s been a journey. I’ve had my ups and my downs,” Robinson said. “I definitely got better, whether it be physically or mentally since I broke my foot. Mentally, I had to get stronger because I had to turn that loss into a lesson.

“I had to focus on the things that I could try to work on to get better so when I did get back I wouldn’t be as far behind as I would be if I wouldn’t have turned that loss into a lesson.”