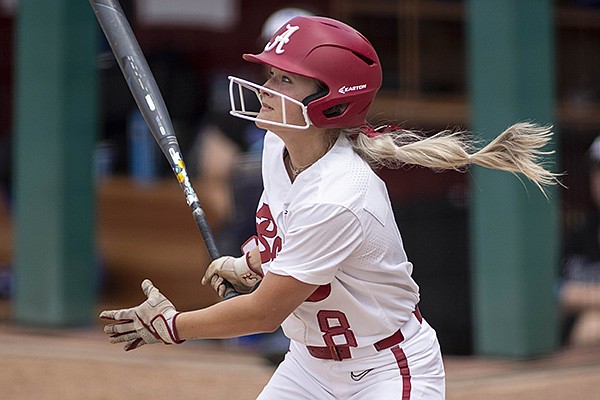 Alabama outfielder KB Sides (8) during an NCAA softball game on Friday, May 28, 2021, in Tuscaloosa, Ala. (AP Photo/Vasha Hunt)

FAYETTEVILLE — KB Sides, a three-year starting outfielder at Alabama, will transfer to Arkansas for her final softball season in 2022.

Sides, who will turn 22 on July 27, was on the All-SEC defensive team this year when she started 47 of 48 games for the Crimson Tide. Alabama (52-9) lost in the semifinals of the Women's College World Series.

A Dora, Ala., native, Sides was her state's 2017 Gatorade player of the year at Sumiton Christian School. As a high school senior she earned the National Fastpitch Coaches Association's Golden Shoe Award, which is presented to the nation's best base stealer.

Sides started 143 games at Alabama and was successful in 43 of 48 stolen-base attempts.

Arkansas has added two SEC transfers this offseason. Former Tennessee left-handed pitcher Callie Turner committed to the Razorbacks last week after compiling an 18-10 record and 2.50 ERA in 168 1/3 innings with the Lady Vols.