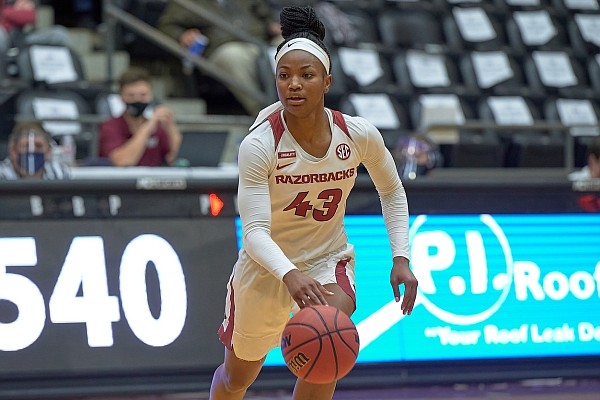 Arkansas guard Makayla Daniels looks to make a play during a game against Arkansas-Little Rock on Dec. 19, 2020, at the Jack Stephens Center in Little Rock.

The Razorbacks are scheduled to play the Golden Bears on Sunday, Dec. 5 in Bud Walton Arena, according to a game contract obtained Tuesday through a Freedom of Information Act request.

A game time has not been set. The game was finalized late last month.

The Razorbacks have played Cal four times, once since Arkansas won 112-80 in the 1987 NWIT championship game. The Razorbacks lost 84-80 at Cal in November 2019 in the first game of a home-and-home series.

The teams were scheduled to meet in Bud Walton Arena last season, but the game was canceled due to covid-19. The series is tied 2-2.

Dalayah Daniels, a 6-3 forward, and Leilani McIntosh, a 5-5 guard, highlight the Golden Bears’ returning players. Daniels averaged 11.9 points and 6.7 rebounds, and McIntosh, who led the team in assists (55) and steals (30), added 10.1 points per game.

Arkansas also has scheduled home games against SMU on Nov. 22 and Arkansas-Little Rock on Dec. 12, and a game against Central Arkansas on Dec. 18 at Simmons Bank Arena in North Little Rock.