Razorbacks to host Gardner-Webb in November 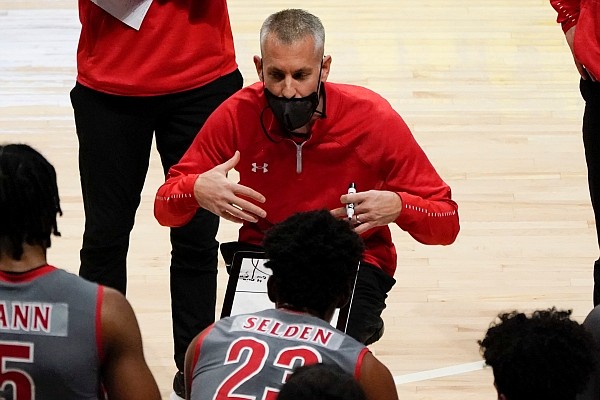 Gardner Webb head coach Tim Craft talks with the team in a timeout during the first half of an NCAA college basketball game against Pittsburgh, Saturday, Dec. 12, 2020, in Pittsburgh. (AP Photo/Keith Srakocic)

FAYETTEVILLE — Arkansas basketball has added another date to its 2021-22 schedule.

The Razorbacks are set to play Gardner-Webb on Saturday, Nov. 13 at Bud Walton Arena, according to a game contract obtained Tuesday through a Freedom of Information Act request. The game was finalized last month.

Coached by Tim Craft, the Runnin’ Bulldogs are expected to return a trio of talented guards in Lance Terry (6-2), D'Maurian Williams (6-5) and Jordan Sears (5-11). Terry and Williams averaged 11.4 and 10.8 points per game last season, respectively, and Sears is back after putting up 9.4 points and shooting 40% from three-point range on 93 attempts.

Both players ranked in the top 40 nationally in block percentage (8.7), according to KenPom data.

The game against Gardner-Webb is the fourth known home date for the Razorbacks in the 2021-22 season. They are also scheduled to host Central Arkansas on Dec. 1; Elon on Dec. 21; and West Virginia on Jan. 29 as part of the Big 12/SEC Challenge.

The Razorbacks are scheduled to participate in the Hall of Fame Classic in Kansas City on Nov. 22-23. Arkansas will be joined by Illinois, Kansas State and Cincinnati at the event.

Games will be played at T-Mobile Center, but matchups have not been announced.

The Razorbacks remain under contract to play Oklahoma at the BOK Center in Tulsa on Saturday, Dec. 11. Former Arkansas assistant coach David Patrick accepted a position on the Sooners’ coaching staff this spring.