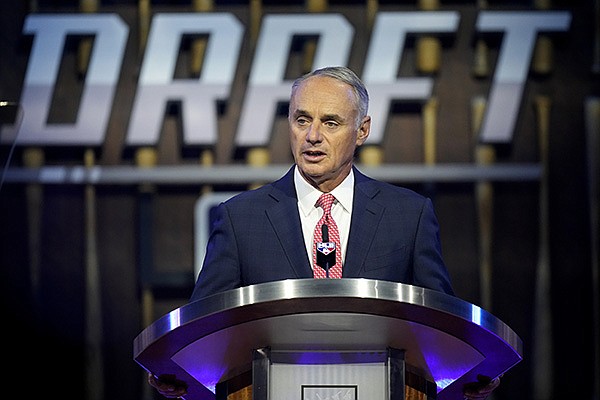 FAYETTEVILLE — Max Muncy, a high school shortstop who signed to play college baseball at Arkansas, was drafted 25th overall by the Oakland Athletics on Sunday in the first round of the MLB Draft.

Muncy, 18 of Thousand Oaks, Calif., was the Razorbacks’ only signee or player selected on the first night of the draft, which included 36 picks. The draft will resume Monday with rounds 2-10.

Muncy hit .459 with 11 home runs and 49 RBI as a senior at Thousand Oaks High School this year. He hit four grand slams.

During an interview last month, Arkansas coach Dave Van Horn mentioned Muncy by name as a player who could contribute immediately if he made it to campus. Nate Thompson, the Razorbacks’ hitting coach and recruiting coordinator, said Friday that Muncy would command a high signing bonus to turn pro.

“He’s really confident, too, in what he’s capable of and what he deserves, and he may end up getting it, too,” Thompson said. “The projections are right around there.

“I’ll say this: I think if a player ends up going in the first round, it’s going to be pretty hard to get them to school, unless some organization decides we’re going to take this guy and then try to drive their price down or wait them out.”

Muncy is the first Arkansas high school signee drafted in the first round since 2011, when outfielder Brandon Nimmo was drafted 13th overall and pitcher Michael Fulmer was drafted 44th overall by the New York Mets. Nimmo is in his sixth season with the Mets' big-league team and Fulmer, who was the 2016 American League rookie of the year, is in his sixth season with the Detroit Tigers.

Peyton Stovall, a shortstop from Haughton, La., who is signed to play for the Razorbacks, had been listed as a first-round pick in some mock drafts leading up to Sunday. Stovall is believed to be asking for a seven-figure bonus, which could create some sign-ability concerns that cause him to fall to later rounds.

“It’s going to take a good chunk of change," Thompson said of Stovall. "He may get it, but if he doesn’t, I know he feels real good about being here. It’s all up in the air. It only takes one team.”

Stovall and Texarkana outfielder Braylon Bishop are among the Arkansas signees to watch during Monday's portion of the draft. Baseball America rated Stovall the 33rd-best prospect and Bishop 88th going into the draft.

Stovall, Bishop and Muncy (43) were among 10 Arkansas signees who were rated among Baseball America's 500 best prospects.

Any signees drafted after Monday are less likely to turn pro due to MLB rules that include financial penalties for bonuses above $125,000 for players drafted in the 11th round or later.